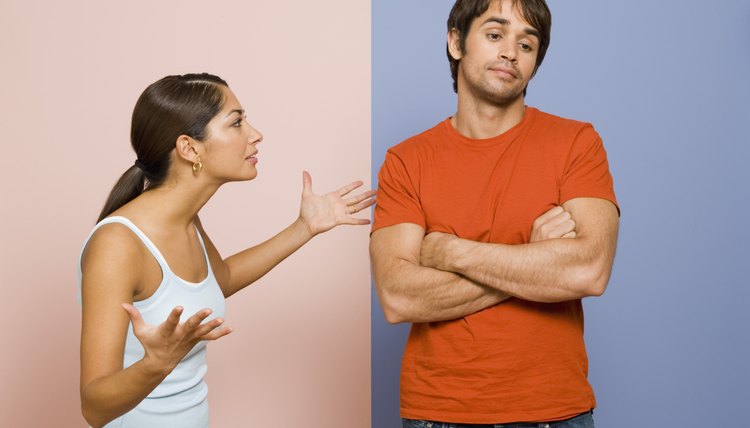 California was the first state to implement the concept of no-fault divorce in 1970. Since that time, you only have two options for filing for divorce: That your marriage is irretrievably broken or that your spouse is incurably insane. In either case, you don’t need your spouse’s agreement to end your marriage. California courts are not supposed to consider infidelity or any other fault when granting a divorce. However, judges can consider the financial impact a partner’s adultery might have on the non-straying spouse. In rare cases, a judge might consider if the adultery had any effect on the children of the marriage.

California is a community property state, so you and your spouse equally own anything acquired during the marriage, except if one of you received it by gift or inheritance. California calls this your marital estate, and it includes income. If an adulterous spouse spends any of his income on his paramour, he’s effectively taking it from the marital estate, and the court will hold him accountable for this. A judge can’t give one spouse more property because she was wronged, but he can order the straying spouse to reimburse the marital estate for half the money he spent: his spouse’s portion. This would require the wronged spouse to produce proof of what her partner spent, however, so she could get her half back.

California law addresses adultery with respect to alimony, but not in the way you might expect. If a spouse is guilty of infidelity, the court won’t order him to pay support because of his misconduct, because that would be punitive. A judge can only base alimony on the financial needs of one spouse and the ability of the other spouse to pay it. This can be pivotal, however. If the wronged spouse begins cohabiting with a new significant other after she and her spouse break up, but before the divorce is final, Section 4343 of the California Family Code says that this “decreases” her need for financial support. A judge can consider this and award less alimony accordingly.

Adultery least affects the court's decisions regarding custody in California. Like all states, California bases custody on what is in the best interests of the child, and the state believes that a healthy and close relationship with both parents is in a child’s best interests. A spouse’s infidelity would have to interact with his children in such a way as to weigh on his fitness as a parent, such as if he engaged in an intimate or sexual act with his paramour in their presence.

Divorce is never easy, but we can help. Learn More
Florida Divorce Laws on Infidelity

Is Adultery Illegal in Texas?

Adultery isn’t a crime in Texas; a spouse won’t go to jail, earn a criminal record or pay a fine if she strays. However, the state’s laws do address infidelity, so an adulterous spouse won’t always get off scot-free either. The state’s legal code does allow for punitive damages, or punishment, for adulterous behavior. Although adultery is not a criminal offense, it’s still in violation of certain Texas civil laws.

If your spouse has strayed, you might have good reasons for wanting to file for divorce on grounds of adultery -- but doing so might not result in more than some personal satisfaction. Illinois recognizes adultery as divorce grounds, but you could probably end your marriage much more quickly and economically if you filed on the state's no-fault grounds of irreconcilable differences instead.

The law is firm that you can't get married if you're already married to someone else. If you do, it’s bigamy – unless ...