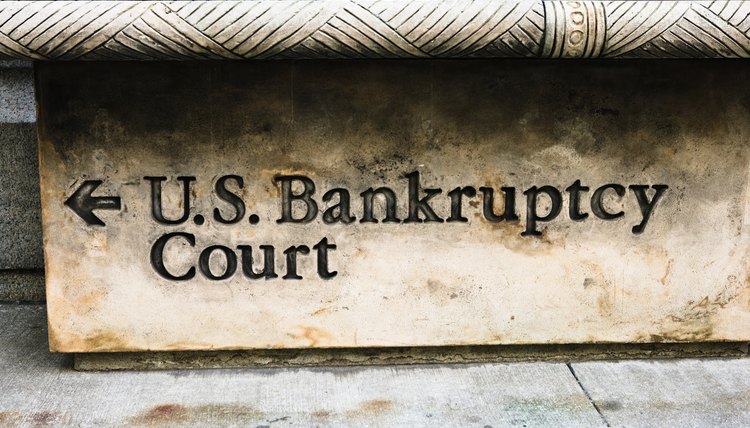 In a divorce settlement, the parties often agree that one party will assume all responsibility for a joint debt. Under Chapter 7, the court can't discharge this obligation, so the other party is not affected by the bankruptcy. In a Chapter 13, if the court determines that the obligation is not in the nature of support, the debtor may be able to discharge all or part of the obligation. So, if you have a settlement agreement where your spouse is supposed to take the joint debt, you still can get stuck with it. If your spouse gets his responsibility for the debt discharged in a Chapter 13 bankruptcy, you are responsible for that debt, no matter what's written in the settlement agreement.

A pension is a unique asset because the future payments are usually distributed through a Qualified Domestic Relations Order. The bankruptcy court has determined that the spouse's share is immediately transferred when the QDRO is issued, so that the debtor spouse no longer owns the asset when he files for bankruptcy after the divorce. The bankruptcy does not affect a pension distributed in this way, and the spouse who didn't go through the bankruptcy still will receive all the payments to which she is entitled to under the divorce settlement.

Divorce is never easy, but we can help. Learn More
Can You File Bankruptcy on Bills Obtained in a Divorce Settlement?

Does Filing Bankruptcy Excuse You From Court Ordered Divorce Fees?

The financial pressures attendant to a divorce case can place enormous strain on a person's budget. Increasing expenses without increasing income can drive even the most financially responsible party to the brink of bankruptcy, but being ordered to pay the other side's court costs and legal fees can push him over. You can sometimes discharge court-ordered fees from divorce cases, but the specifics vary from case to case. Consult an attorney before making any decisions.

What Does a Discharge in a Chapter 13 Bankruptcy Mean to Debtors?

Bankruptcy allows a debtor to obtain relief from his creditors if he meets certain legal requirements. Chapter 7 bankruptcy is a liquidation of assets, while Chapter 13 bankruptcy involves repayment of some, or all, of the debt owed. If a debtor’s income is above the state median income and he has enough disposable income to repay his debt, Chapter 7 is not an option. In both types of bankruptcy, there eventually is a discharge of debt.

If you file for bankruptcy protection from creditors, a federal court gains jurisdiction over your assets, debts and financial affairs. The court has the authority to eliminate dischargeable debts, liquidate your assets or set up a repayment schedule (as in a Chapter 13 bankruptcy filing). However, the court also has the authority to dismiss or terminate the case, either on your motion or on its own initiative.

What Is Family Support Vs. Spousal Support?

Family support, spousal support and child support are all intended to provide financial assistance to a former spouse ...

Can My Ex Sue Me for Back Alimony After I Filed Bankruptcy?

Although bankruptcy can provide you with a fresh start, not all debts are dischargeable. Past-due alimony, or spousal ...

Filing for bankruptcy before a divorce has been finalized will complicate the divorce settlement. While state law ...

Discharge of Property Settlements in Bankruptcy

Federal bankruptcy law underwent a significant overhaul in 2005 with the passage of the Bankruptcy Abuse Prevention and ...