California spousal support, or alimony, is designed to maintain one party in the divorce in the same lifestyle she enjoyed during the marriage. Spousal support is money paid by one spouse to the other in accordance with a court order issued during divorce or separation proceedings. State divorce laws set the court guidelines for spousal support awards. 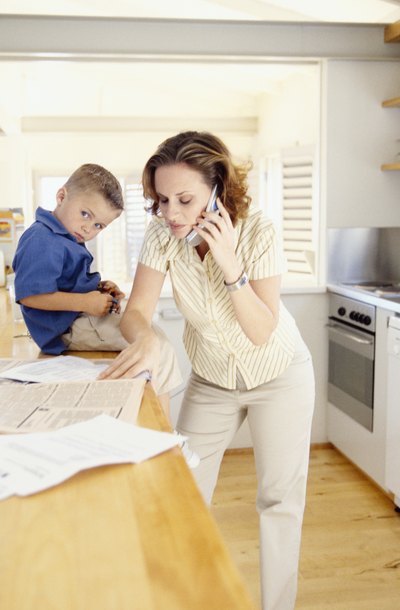 Unlike child support, California spousal support isn't automatically addressed in separation or divorce proceedings, and there are no set percentages. Upon the spouse's request, the court must decide if she's entitled to the support, and, if so, how much and for how long. According to the official website of California divorce attorneys Dishon & Block, courts typically set the duration of support for half of the length of the marriage if the marriage lasted under 10 years. For longer marriages, one of the parties must return to court to prove when support isn't needed any longer.

California laws direct the court to look at various factors when deciding a spousal support request. The income both parties make is reviewed, as the court must take into account the requesting spouse's ability to maintain her lifestyle and the other spouse's ability to pay. Debt acquired by the other spouse as a result of a property division might negate the requesting spouse's right to support, and her request is weighed against the standard of living the couple had together to ensure she's not overstating her financial needs. How long the two were married might be a factor, if the union kept the requesting spouse out of the workforce for an extended period of time. Other circumstances that a court considers include documented domestic violence and any other factors the court deems relevant to the request.

The paying party has the right to petition the court to ask that the support award be lowered or ended, and the receiving party can ask for an increase. Even so-called "permanent" spousal support awards can be changed or ended in California. Modifications and terminations typically involve a significant change in the finances of one of the parties. State law also allows the paying party to ask the court to evaluate the receiving spouse's ability to work if she's been receiving support but has not yet found a job.

If the requesting spouse contributed to the education of the other spouse, increasing his ability to make money, she may be entitled to reimbursement in the form of spousal support under California law. A requesting custodial parent is given additional consideration in a spousal support case, because her ability to work might be restricted by the need to care for the children. In California, the judge may insert what is referred to as a "Gavron Warning" in the support award. Part of the California divorce laws, the warning instructs the receiving spouse to work toward supporting herself and allows the paying spouse to request support termination if the court finds no progress has been made toward that goal.

Spousal support serves an important role in helping a divorcing spouse with insufficient income make the transition to single life. Courts in Idaho may award support if one spouse is not able to support himself; couples also have the option to negotiate and enter into a spousal support agreement on their own. Spousal support may automatically end after a period of time and either spouse may petition the court to modify support if circumstances change.

How to Amend My Alimony Judgment in Louisiana

Louisiana recognizes both temporary and permanent alimony, called spousal support in Louisiana. However, permanent support is only awarded to an innocent spouse -- one who is not at fault in the divorce. Once awarded in the final decree, support may be modified if there has been a substantial change in the circumstances of one or both spouses. An innocent spouse may also ask the court to amend the final decree to add support where there originally was none, as long as she asks within three years after the final decree is issued.

To receive welfare in California, applicants must meet strict income requirements, and any income received from alimony ...

Alimony, also called spousal support, may be awarded during a divorce proceeding in Kansas. Alimony is paid by one ...