Can Child Support Use Veterans Disability as Income?

Child support is set by state courts under guidelines established by state laws. Federal benefits, like those administered by the Department of Veterans Affairs, are not subject to state laws or state court rulings; federal rules govern when and how veterans benefits can be distributed. This means that you must work under federal guidelines when determining whether your ex-spouse's disability payments will be considered as income when establishing and collecting child support. 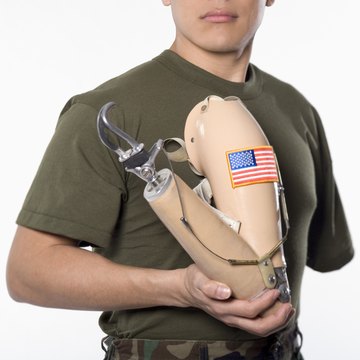 Child support payments are typically based on a calculation involving each spouse's income. These calculations are based on state guidelines, and each state's courts can set child support in different ways. Generally, monetary veterans benefits, like disability and retirement pay, are considered income for child support purposes. Thus, even if your ex-spouse is not employed and has no other income, he can still be ordered to pay child support based on his income from veterans benefits. Non-monetary benefits, such as medical care or commissary privileges, are typically not included as income.

Even though your state court orders your spouse to pay a certain amount for child support, it can be difficult to collect that support if he is unwilling to pay it. Frequently, a paying parent's employer can withhold the money directly from his paycheck, but that isn't quite as easy to do with disability pay or other VA benefits. Since VA monetary benefits are generally considered as payment for disabilities or wartime service rather than as remuneration for employment, benefits cannot be garnished, or seized, by a state court's order unless an exception applies.

One common exception is for disability pay that is received in lieu of military retirement pay. For example, if your ex-spouse retires from the military with a pension of $2,000 per month, that money would generally be eligible for garnishment for child support purposes because your ex-spouse receives that money from employment in the military. If your spouse is considered disabled under VA guidelines, he can elect to waive some of his retirement pay and receive it as disability compensation instead. If your spouse waives $500 of his retirement pay to receive $500 as disability compensation, that $500 is still eligible to be garnished under VA guidelines. Thus, your ability to access that money for child support remains unchanged.

If you are unable to garnish your spouse's disability pay because it does not qualify as payment in lieu of retirement pay, you may still be able to receive a portion of his benefits under the VA's apportionment program. Under apportionment, you can ask the VA to send a part of your ex-spouse's disability benefits directly to you as part of your court-ordered child support. The VA will not grant an apportionment request under all circumstances, such as when the veteran receives a very small benefit. The VA will consider whether evidence supports the idea that your children need financial assistance and that taking money from your ex-spouse's benefits would not cause a financial hardship. Based on all the evidence available, including evidence submitted by you and your ex-spouse, the VA decides whether it would be appropriate under VA regulations to give some of your ex-spouse's benefits directly to you as support for your children.

Divorce is never easy, but we can help. Learn More
Can Child Support Be Taken From a Social Security Check?

Can Social Security Disability Be Attached In a Divorce?

Federal law protects Social Security disability benefits from creditors by providing that such benefits are not subject to levy or attachment. Since federal law preempts state law, it follows that state courts cannot allow disability benefits to be attached for most debts. However, this does not mean that disability payments will not be impacted in any way by your divorce.

What Can I Do if My Ex Is Working Under the Table & Not Paying Child Support?

Federal and state law requires that a noncustodial parent pay child support unless there are special circumstances where a judge waives this requirement. Courts will usually collect child support by garnishing a noncustodial parent's wages. In some instances, your ex-spouse may work under the table or receive cash payments, which makes it difficult for the court to enforce a wage garnishment. If that is the case, there are steps you can take to try to get child support that is owed to you.

Can I Be Forced to Switch Jobs Due to Child Support?

If you have children, your divorce decree likely includes an order to pay a specific amount of child support. Since child support amounts are based on your current income, the court won’t order you to change jobs because of your child support obligations. However, you cannot take a lower-paying job in an attempt to lower your payments.

Can Child Support Payments Be Garnished From an Unemployment Check?

Parents are legally obligated to provide financially for their children, so courts establish child support orders as ...

Can VA Disability Compensation Be Used to Calculate Child Support or Income?

In addition to child custody, separating couples with children must figure out how to handle child support. While the ...

Can I Keep My Alimony Payments if I Live on SSI in California?

California courts can award alimony, or spousal support, to either spouse during a divorce. Once it’s awarded, it ...