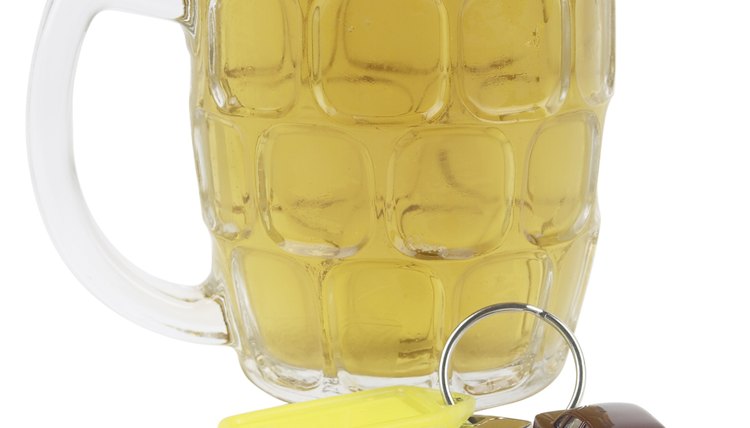 When you're facing divorce, understanding custody can be difficult. States have their own terms for types of custody and sometimes the same word means different things in different jurisdictions. Most commonly, the phrase "joint custody" refers to joint legal custody -- the right of both parents to contribute to important decisions regarding their child's upbringing. This may or may not mean equal parenting time, or that the child spends roughly the same amount of time in the homes of both parents. Even if you have joint legal custody, you might still have your child only on weekends, so she spends more time in your ex's home than in yours.

States have statutory lists of factors that courts consider to determine what is in the best interests of the child, but it's up to an individual judge to interpret them on a case-by-case basis. Few lists mention drunk driving specifically, but many include a catch-all factor that the judge can consider any issue he feels is important. With this vagueness, case law -- a record of how other judges have ruled in the past -- often creates a presumption that an issue should be handled in a certain way. In Arizona, judges generally will not award joint custody when one parent has a DUI on his record. In Illinois, however, the matter might be open to debate. A soon-to-be ex would have to establish that the DUI somehow adversely affects or affected the child.

If a dad had one DUI in college and is in his 30s at the time of divorce, the court might well overlook the mistake because it's no longer pertinent. However, if he was convicted during the divorce proceedings, it could have a far greater effect, as it might indicate a current alcohol problem that could affect the child and cast doubt on his ability to make important spur-of-the-moment decisions in an emergency. A judge can weigh whether he's taking steps to deal with the problem, such as by attending counseling or getting treatment. Another important consideration, particularly if the dad is asking for joint physical custody or parenting time, is whether he's lost his driver's license. The court may not split a child's time between both parents' homes if the dad has no way of transporting the child around.

Another important factor is that courts tend to be slow to award joint custody when one parent vehemently objects to it. The rationale is that parents must get along reasonably well if they're going to make joint decisions regarding their children or co-parent on a reasonably equal schedule. If they can't even agree on custody terms as part of their divorce, this doesn't bode well for a joint custody arrangement. Joint custody is usually ordered when divorcing parents request it, and even then, they must sometimes prove that they can get along well enough to make it work. If both parents agree that joint custody is the best arrangement and ask the court for it together, if the DUI occurred some time ago, it might not have any impact on the court's decision at all. By the same token, if a parent objects to joint custody so much that she raises the specter of a long-ago DUI, the fact that she's fighting the arrangement might carry as much -- if not more -- weight than the DUI conviction.

Divorce is never easy, but we can help. Learn More
Bipolar Illness and Child Custody

Like many states, Kansas has done away with the “tender years doctrine” that once assumed mothers should always have custody, especially of babies and younger children. The state’s legislative code now specifically states that courts will not consider a parent’s gender when determining custody in a divorce. Technically, both mothers and fathers enter into custody disputes on equal footing.

While child custody and visitation is dictated by state law, every state awards custody and visitation based on the best interests of the child standard. In other words, parents must show that the visitation and custody that they are requesting represents what is best for the child. States do not automatically award custody to the mother or the father, and sometimes parents share custody of their children.

Custody disputes in a divorce really are a lot like battles, as you line up your arsenals of evidence and testimony, ...

Divorcing parents can't deny each other custody, but courts can do so. Judges typically do their best to preserve the ...

Although all states recognize no-fault divorce, the majority recognize fault-based grounds in addition to their ...

Can a Parent With Sole Custody Deny Visits?

If you have sole custody, you probably have a court order that awards you both legal custody and physical custody. ...