Can a Sibling Get Power of Attorney Changed Without the Brother Being Told? 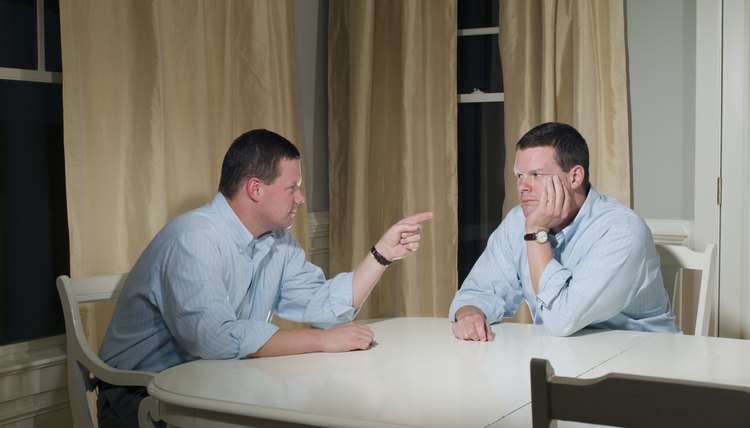 A power of attorney document is a legal form in which one person, called the principal, grants another person, called the agent or attorney-in-fact, the power to make decisions on his behalf or when he becomes physically or mentally incapacitated. A principal usually grants a power of attorney for financial or health care matters. An elderly parent will frequently choose a son or a daughter to act as his agent.

State laws governing powers of attorney differ from one state to the next as to whether a power of attorney must be filed with a court and, if so, what types must be registered. Traditionally, the principal and agent are not required to notify other family members of changes to the sibling's power of attorney and agents typically serve without supervision.

A common situation in elder care law occurs when a parent agrees to give two siblings power of attorney, usually without informing either or both that he has done so. This situation is commonly referred to as dueling or competing powers of attorney, i.e. when two or more persons hold a power of attorney for the same principal and the powers granted by each conflict with one another.

If you suspect or know that a dueling power of attorney situation exists, or your power of attorney has been amended or revoked under suspicious circumstances such as your sibling taking advantage of your parent's mental deterioration, you have some legal options. You can contact your parent and sibling, in writing, and politely ask that copies of any altered or new power of attorney is sent to you and your other siblings immediately. You can also contact the clerk of the local court where your parent lives to see if any powers of attorney have been registered with that court.

You may have to enter fiduciary litigation, a lawsuit in which you require your sibling to account for what he has done with your parent and your parent's property. You can also ask a court to appoint you as your parent's conservator on the grounds that your parent is not mentally able to manage his affairs.

Ready to appoint a power of attorney? Get Started Now
Can a Sibling With Power of Attorney Prevent Other Siblings From Seeing a Parent?

Do I Need a Power of Attorney for Me to Leave on Vacation?

Since no two businesses or vacations are the same, only you can determine whether your business needs a substitute hands-on boss while you are at the beach. With the technology available today, many vacationing businesspeople simply check in by phone or Internet to make critical decisions. However, it is also possible to give a trusted employee authority to act in your behalf under a power of attorney.

How to Cancel a Power of Attorney

Giving someone power of attorney over you or your affairs requires that you trust that person completely. A power of attorney allows him to legally act in your stead and make decisions for you. Many states automatically sever the power-of-attorney relationship between spouses in the event of a divorce. As long as you remain mentally competent, you can cancel a general POA yourself at any time.

How to Release the Power of Attorney

Many estate planning professionals recommend powers of attorney as worthwhile tools to keep the details of your life running smoothly in the event of an emergency. You can use a power of attorney to authorize an agent -- often a loved one or another trusted individual -- to make decisions regarding your medical care or to deal with the financial details of your life should you become incapacitated. A durable power of attorney grants your agent immediate authority to handle your personal affairs, such as contracting for debt in your name, as well as authority after your incapacitation. If you decide that you’ve entrusted the wrong individual with these important powers, releasing your power of attorney is a simple matter of revoking it.

Only two persons or entities can grant you the right to act on your disabled parent’s behalf: your parent or the court. ...

How to Get a Power of Attorney for a Sick Parent

Getting a power of attorney for your sick parent allows you to perform some actions for her, making life easier for her ...

How to Get Power of Attorney Over a Parent

A power of attorney is used to empower someone, known as the attorney-in-fact or agent, to make medical decisions, ...

How to Form a Subsidiary Corporation in Florida