Federal law allows an individual to choose between two bankruptcy options: Chapter 13, which organizes debt into a payment plan, and Chapter 7, which erases most consumer debt. Since Chapter 7 eliminates debt, there are strict income and debt limitations imposed by law to ensure that only people in the greatest need are afforded this type of protection. 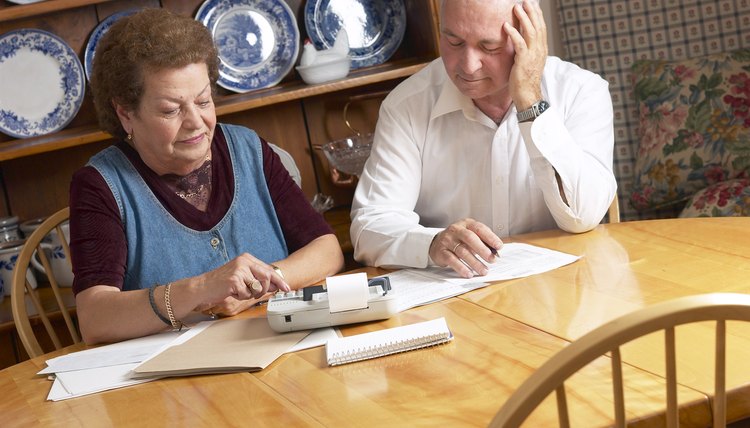 To qualify for Chapter 7 protection, a debtor's income must fall below the median income for her state. This income comparison depends on several factors, including the number of household members and the state where the debtor lives. As of 2012, a person living alone in Illinois is eligible so long as her income does not exceed $46,983. The income cap increases to $59,794 for two-person households, $68,865 for three-person households and $81,570 for households with four people. If the household includes a spouse whose earnings are used to pay expenses, his income is counted as household income.

If a debtor's income is greater than the median income in Illinois, a second step in this "means testing" is needed to determine whether she qualifies for Chapter 7 bankruptcy protection. This is a complicated process requiring the debtor to calculate her gross household income, then subtract certain deductions to determine her discretionary spending. If the discretionary spending is greater than an amount set by law, the debtor is not qualified for Chapter 7 bankruptcy protection.

In addition, a debtor must also undergo credit counseling within six months prior to the filing of the petition. The petitioner must also pay filing fees to the Bankruptcy Court in addition to any other legal fees.

Get a free, confidential bankruptcy evaluation. Learn More
Chapter 7 Vs. Chapter 11 for Individuals

Maximum Time for a Chapter 13 Bankruptcy

The amount of your income is a qualifying factor for both Chapter 7 and Chapter 13 bankruptcies. For Chapter 7, it determines whether you're eligible, and with Chapter 13, it affects the length of your repayment plan -- the maximum time is five years. During this period in a Chapter 13 bankruptcy, you must provide the trustee with your disposable income each month, and the trustee uses this money to pay down your debts.

Is Social Security Included in the Means Test for Chapter 7?

Chapter 7 of the United States Bankruptcy Code permits you to discharge some of your consumer debt if you pass a means test. The purpose of Chapter 7 is to provide debtors with an opportunity for a fresh start by prohibiting creditors from collecting those debts. The means test assesses whether your income is insufficient to repay creditors after deducting living costs. If so, you may file for Chapter 7 bankruptcy. Social Security benefits are not included in the income calculation.

Bankruptcy law is designed to provide a “fresh start” from debt and sets up alternative remedies defined by the ...

Is it Better to Be on Disability When Filing for Chapter 7 or 13?

If you are on Social Security disability and considering filing for bankruptcy, it can be difficult to choose between ...

Provisions of Chapter 13 of the Federal Bankruptcy Laws

Chapter 13 bankruptcy is a form of personal bankruptcy that allows an individual’s debt to be adjusted if he has a ...

What Are Living Costs in Chapter 7?

Not everyone qualifies for a complete discharge of indebtedness under Chapter 7 of the federal bankruptcy law. An ...