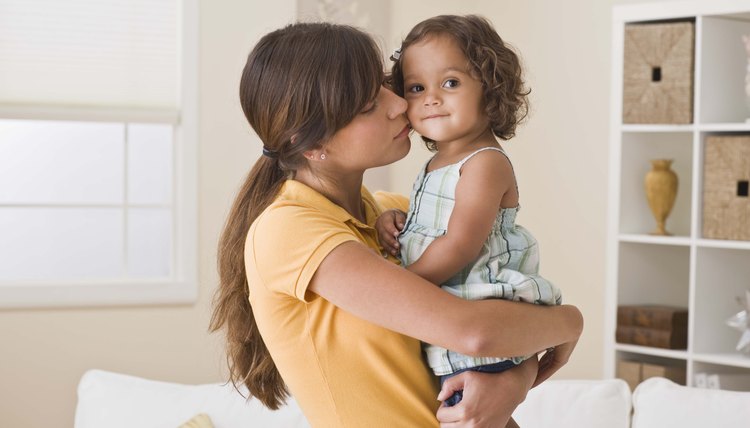 Generally, courts determine custody at the time of a divorce. The court may award several types of custody, including physical custody, legal custody and joint or shared custody. A parent with a drug addiction may be denied the right to share in the care of his child, or physical custody, if he is using drugs. Likewise, the court may take away a parent’s legal custody—or right to make decisions for the child—if the parent does not seek substance abuse counseling or make other efforts to achieve sobriety. If the parents have joint custody--that is, if they both care for the child and make decisions regarding the child's welfare--the court may modify its order and give the parent without a drug problem sole custody.

Courts generally prefer parents reach custody agreements on their own or with the help of a third-party mediator. If parents cannot resolve their disagreements, the court may step in and make a custody determination for them. When making a custody ruling, most courts look at what arrangement is in the best interests of the child. This often includes an examination of parents' moral fitness and how well each parent can care for the child's physical and emotional needs. Thus, courts often look at parents’ substance abuse histories when making a custody determination. As a result, a parent's history of drug abuse may affect the initial custody determination.

After the court establishes a custody arrangement, a judge may modify this agreement if he learns one of the child's parents is abusing drugs. Often, the child’s other parent brings the drug abuse to the court’s attention. The judge may ask the parent to take a drug test and suspend visitation, remove custody or limit parenting time if the parent tests positive for illegal substances.

If one parent is given sole physical custody of a child, the other parent is typically granted visitation, or parenting time, with the child. That said, if a parent has an addiction and is under the influence of drugs, he may be denied visitation or granted only supervised visits. To ensure the safety of a child during visitations, the parent with substance abuse issues may be asked to take a drug test prior to visits with their child.

When a court finds that a parent is addicted to or abusing drugs, the judge may order the parent to attend rehabilitation counseling. Depending on the severity of the parent's substance abuse issues, rehabilitation counseling may include seeing an outpatient substance abuse therapist or attending Narcotics Anonymous meetings. In severe cases of addiction, the court may ask a parent to attend in-patient detoxification and rehabilitation in a hospital or mental health facility. While in treatment, the parent may be granted supervised visits with the child. If the court suspends custody or visitation, the court may reverse its decision after the addicted parent successfully completes rehabilitation services. However, failure to comply with court ordered rehabilitation may lead to the permanent termination of parental rights.

Divorce is never easy, but we can help. Learn More
Divorce With Children & a Drug Addicted Spouse in Maryland

Can Physical Custody Be Changed for Children When Parents Have Joint Legal Custody?

In many instances, it is possible for parents to change their children’s physical custody arrangement when the parents have joint legal custody. That said, each state makes its own laws regarding child custody issues. Thus, the exact procedures for changing physical custody, and even the terminology used to refer to custody arrangements, vary from state to state. In other words, the process for changing custody will vary based on where the family lives.

Bipolar disorder can be managed effectively with ongoing professional treatment. Thus, many women with this condition ...

Habitual dependence on drugs or alcohol can call into question a person's ability to make good decisions, as well as ...