Child support is designed to ensure that children do not suffer financially when their parents split. When parents divorce, the divorce court establishes an amount of financial support the noncustodial parent must pay to the custodial parent. However, each state uses its own guidelines and methods to set and process these payments. 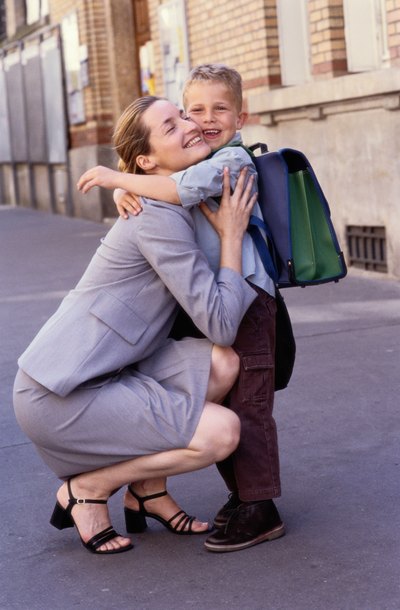 A more common method of child support calculation is the income shares model, which is based on the idea that both parents should provide a portion of their incomes to support the child and that this portion should not change when the parents divorce. States that use this method and the Melson formula, which is similar to the income shares model, consider both parents' incomes when assigning a support amount. Generally, these states establish a percentage of both parents' incomes that must be paid for support, dividing that amount between the parents according to the proportion each contributes to their combined incomes. For example, if the noncustodial parent makes 30 percent of the parents' combined income, he will pay 30 percent of the total support amount set by the state.

Courts establish child support amounts in a court order, often as part of the divorce decree. This may be completed through an income withholding order, which requires the paying parent's employer to withhold money from the paying parent's wages. The employer then sends the money to a state agency which forwards that payment to the custodial parent. Noncustodial parents who are self-employed or unemployed have the same payment requirements but must send payments to the state agency on their own since they do not have employers to withhold the payment amounts for them.

When couples divorce, the court may issue a divorce decree ordering a spouse to pay child support and alimony to the other spouse. Typically, the divorce decree describes the manner in which payments must be made. Courts may direct that alimony be paid directly to the recipient spouse while child support is paid to the recipient spouse through the state’s child support agency. However, if these arrangements do not work well for the parties, the court may permit alternate arrangements.

Each state has different rules when it comes to child support, but Florida allocates the support amount between parents based on each parent’s share of the spouses’ combined income. This model of determining child support, called the income shares model, is based on the idea that children should receive the same financial support during the divorce process, and once the divorce is finalized, as they received when their parents were still married.

As in other states, Massachusetts parents must provide financial support for their children, even if the parents are ...

Can I Get Child Support From a Self-Employed Father?

Parents are required by law to provide financial support for their children, even after they divorce. State laws ...