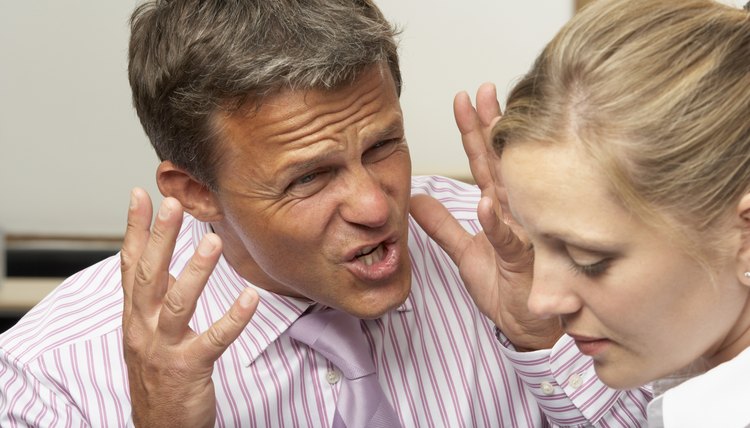 According to HelpGuide.org, a nonprofit organization dedicated to helping consumers recognize and put a stop to domestic abuse and violence, verbal abuse is a form of emotional abuse. Yelling, insulting or belittling are all forms of verbal abuse you may suffer from your former spouse. While disagreements following a divorce are common, there are differences between a heated argument and genuine verbal abuse. Verbal abuse is a direct attack on the victim's self-esteem and gives the abuser a way of gaining control over a disagreement.

While verbal abuse is a form of harassment, harassment takes many different forms as well. Harassment occurs when the abuser sets out to intentionally cause the victim emotional harm on a regular basis. Examples of harassment include calling repeatedly with no purpose other than to verbally abuse the victim, threatening to hurt or destroy people or items the victim cares about or posting derogatory claims about the victim online. While all states define harassment differently, the practice is illegal and victims have the right to press charges. In November of 2011, a judge sentenced a Missouri man to four years in prison for harassment after he posted intimate photographs of his ex-wife online.

Showing that your spouse is verbally abusing or harassing you can cause him to lose custody of your children following a divorce. One of the custody regulations set by the National Conference of Commissioners on Uniform State Law notes that, when determining custody, a judge must consider which parent is most likely to help a child maintain a relationship with the other parent. This “best interests” standard for determining child custody applies in all 50 states.

If you or your child are a victim of harassment or verbal abuse from your former spouse, you can seek the court's aid in rectifying the problem. State laws vary, but abused former spouses can often apply for a civil order or protection preventing the abuser from contacting them or their children. In some states, such as Ohio, a judge may order the abuser to seek counseling for anger management as part of the protection order.

Divorce is never easy, but we can help. Learn More
What Is Considered Verbal Harassment in a Divorce in California?

The Effects of Divorce on Society

Divorce can save people from a bad marriage, but research has shown that it can also debilitate a society. Divorced adults are more likely to become impoverished while their children experience psychological and economic stress hindering their social development. According to the National Marriage Project, between 1960 and 2009, the divorce rate in the United States doubled; between 40 and 50 percent of newly married couples will either separate or divorce. With high divorce rates threatening social stability, the United Nations urges governments everywhere to adopt policies to reverse this trend.

In Arizona, an order of protection offers protection from family members, including spouses, who have threatened or assaulted you. Protection orders are frequently requested as part of divorce proceedings. While these orders do not directly affect divorce or change divorce proceedings, they may be used as evidence against you or your spouse. You can request an order of protection during your preliminary divorce hearing or as part of the pleadings you file while litigating your divorce.

Divorces can become highly contentious between spouses. However, Iowa is a pure no-fault state, which means that a ...

Can a Man Get Custody If He Files for Divorce?

Child custody determinations are made based on the "best interests of the child" standard in all states. Some states, ...