How to Contest a Divorce Petition in Indiana

In Indiana, couples often disagree on property division, child custody or other terms of the divorce. You have the right to contest your spouse's divorce petition, but state laws make it tricky to challenge the divorce altogether. Many couples in Indiana try to come to their own agreement for the terms of the divorce in order to avoid the time, costs and unpredictable nature of going to court. 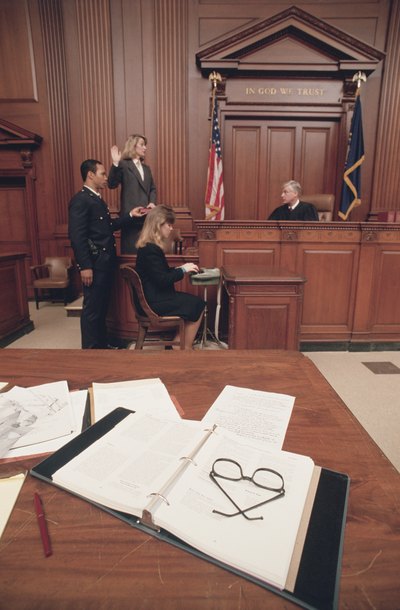 In Indiana, most couples divorce on the grounds that the marriage is irretrievably broken, meaning that neither spouse is to blame for causing the divorce. The only other available grounds for divorce are incurable insanity, impotency or a felony conviction. When the grounds asserted do not place blame on either spouse, it is difficult to challenge the reason for getting divorced. As a result, the grounds for divorce are generally not contested, but rather the disagreement is usually over the terms of the divorce, including property division, support and custody.

In Indiana, the divorce process begins with filing a petition in the Domestic Relations Court, a division in the Court of Common Pleas, in the county where either your or your spouse lives. If your spouse filed the petition, she must serve you with a copy of the petition. After receiving the documents, you have 60 days to respond to the contents of the petition or assert any "counterclaims," claims you may have against your spouse that she did not bring up, such as spousal maintenance. If you do not respond within 60 days or show up at any scheduled hearings, the court may dissolve the marriage without your input and give your spouse everything she asked for in the petition.

If you and your spouse are unable to agree to a divorce settlement, an Indiana court may require that you attend mediation. During the mediation, a neutral third party will help you and your spouse come to an agreement on unresolved issues. If you cannot come to an agreement, the remaining issues will be decided by the court following a trial. At trial, you must present evidence to demonstrate why you should receive what you are asking for in the divorce, such as spousal maintenance, child support or custody of the children.

Divorce is never easy, but we can help. Learn More
Do You Have to Be Separated for 6 Months to File for a Divorce?

When spouses divorce, one spouse may be eligible for "spousal maintenance." This is money you receive from your ex-spouse upon divorce if you are unable to support yourself with your income and assets alone. The Minnesota Statutes set forth the procedure courts use to determine who may receive maintenance and the amount of the maintenance award.

Tennessee law is designed to make the divorce process as quick and inexpensive as possible. The time and cost of a divorce largely depend on the spouses' ability to cooperate with each other during that difficult time. During the divorce proceeding, the court will divide marital assets and award alimony, if necessary.

What Is the Difference Between a Default Divorce & No Fault in Arizona?

Arizona’s no-fault divorce laws make it easier to obtain a divorce than in other states where you must prove wrongful conduct on the part of your spouse. Even though Arizona is a no-fault divorce state, your spouse has the right to challenge your request to end the marriage by filing opposing papers with the court. If your spouse does not file the papers in time, the court may grant you a divorce by default.

The exact procedures of divorce vary between states, but divorce can be a fairly simple process if you have an ...

Filing for divorce can be expensive, forcing you to stay in an unhappy marriage if money is tight. However, if you ...

How to File a Written Answer to a Divorce Petition

You must file a written answer to a divorce petition as soon as possible to avoid missing the court deadline for the ...