How to Contest a Will in the State of New Jersey

You may want to contest a will for many reasons. You might believe that the decedent left a more recent one and you need time to investigate. Perhaps you have reason to believe that the decedent wasn’t of sound mind at the time she made the will. The law in New Jersey is set up to provide you with a window of opportunity to prevent a will from being probated until you have an opportunity to convince a judge that it should not be. 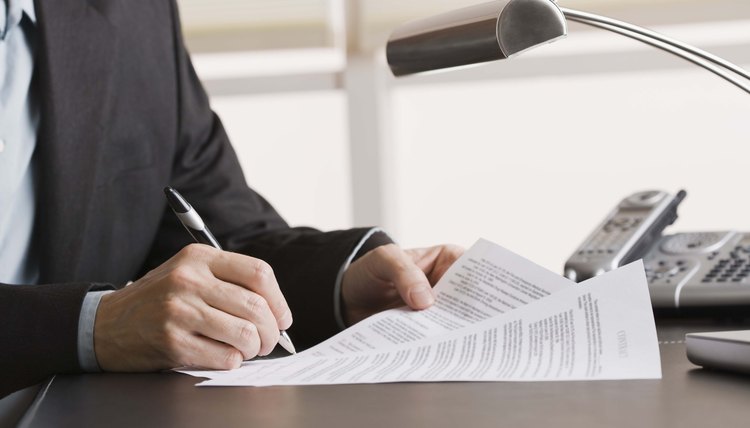 Determine the county in which the last will and testament will be probated. Under Rule 4:80-1(c) of the New Jersey Judiciary, it should be the one in which the decedent lived at the time he died, but it could also be a county in which he held property, or even a county where property owned by him was transferred to.

File a caveat with the Surrogate’s Court in each county where you think the will might be probated. According to Ryan Ian Aufseeser, an attorney in New Jersey, you can file in as many counties as necessary to to protect yourself. A caveat is simply a written statement that you are objecting to the eventual probate. Wills cannot enter probate in New Jersey until 10 days after death, so you have 10 days in which to block the process. If you file a caveat in the appropriate county, New Jersey law prohibits the Surrogate's Court from entering the will into probate until a judge can hear the matter.

Attend the court hearing. Once you have filed a caveat to prevent the will from being entered into probate, the matter is transferred from Surrogate’s Court to Superior Court and you will be given a date to appear in court. A judge will now hear testimony from you, as well as from the will’s executor or her representatives, and he will decide whether to allow probate to proceed. He might also hear testimony from any witnesses to the will or other interested parties.

File a motion with the Superior Court to set probate aside if you do not file a caveat in time or if you file it in the wrong county. According to Rule 4:85-1 of the New Jersey Judiciary, if the will has entered probate, you can bypass the Surrogate’s Court and go directly to Superior Court within four months of probate or six months if you live out of state. After filing a motion with the Superior Court, you will be given a hearing date to appear before a judge to explain your position.

Protect your loved ones. Start My Estate Plan
How Can I Get a Copy of a Will?

There are several ways to contest a will in New Jersey, and each has its own time frame and statute of limitations, according to James Curcio, a real-estate attorney who was elected the Atlantic County Surrogate (probate judge) in 2010. In extraordinary cases, there might be no statute of limitations at all. If you think you have grounds to contest a will, you should consult with an attorney as soon as possible.

How to Find Out If a Deceased Person Had a Will

During a person's lifetime, the only way to discover if he has a will is to ask. The existence of a will becomes public information, however, when the testator dies. The executor files the last will and testament with the court where a probate judge determines the validity of the will and supervises will administration. Probate documents are open to the public for viewing. Once you determine which court probates a deceased person's estate, a look in the court probate file confirms or disproves the existence of a will.

How to Request an Inheritance From an Executor

If you are either a named beneficiary or an heir of a deceased person, you are entitled to an inheritance from the deceased's estate. Beneficiaries are given rights to their inheritance because they are mentioned in the will. Heirs are those entitled to inherit usually because of their familial relationship with the deceased. Beneficiaries and heirs rarely have to request their inheritances from the estate executor, but it is always smart to know exactly what you are supposed to inherit, and how to ask for it if you need to.

In Oklahoma, when the executor of a will files the will with the court and a petition for probate, the court ...

How to Find a Will in Probate Court

Most wills go through probate, a court-supervised process of administering an estate. Soon after the testator's death, ...

How to Locate a Person's Last Will & Testament

The only time you can locate a last will and testament -- legally -- is after the testator is dead. During a person's ...

During a person's lifetime, her will is private; she determines who views the document. After she dies, the will ...