Contingency Liability in a Divorce

Contingent liabilities are potential debts where a party's responsibility has yet to be determined. At the time you and your spouse separate pursuant to a divorce, you may have pending situations where the outcome will depend upon future events, leaving you unable to determine for sure the amount you will owe or even whether you will owe anything at all. 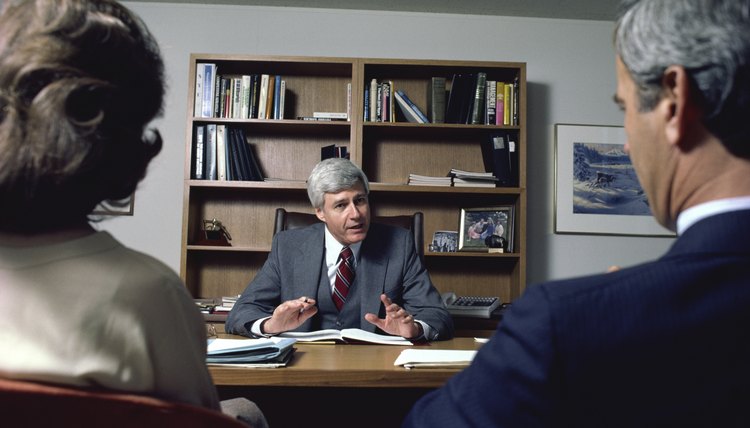 Money owed to state, federal or local governments based upon a couple's previous years' tax returns are a common form of contingent liability that arises during a divorce. Although state laws on debt division in divorce vary, debts incurred during marriage are generally considered to be "marital debts," which a family court judge has the power to assign as part of the divorce proceeding. Even if only one spouse was employed, a tax liability will commonly be considered a marital debt if the income that produced it was earned during the marriage. If the amount of the liability remains undetermined at the time the divorce is settled, the judge can assign responsibility to one party solely, or to both parties in equal or unequal shares.

Financial pressures inherent in the divorce process can sometimes lead to foreclosures of real property and repossession of personal property such as vehicles or boats. When a creditor repossesses property, it will generally sell it at an auction to offset the debt. Sometimes this results in a deficiency between the sale price of the asset and the outstanding debt balance. Although the property sale may not occur before you're ready to divide your marital debts, the possibility exists that you and your former spouse may face a deficiency judgment on a joint mortgage or personal property loan. A divorce court order that gives one party the sole responsibility for a joint debt won't necessarily prevent the cosigner from being sued or having his or her property seized by the creditor if the debt is not paid.

Contingent liabilities can arise from medical treatment rendered to a spouse prior to divorce. For example, under North Carolina's common law "doctrine of necessaries," you could find yourself being sued by doctors and hospitals who rendered necessary medical treatment to your spouse before the entry of a divorce judgment, even though you were separated at the time the treatment was provided. Due to pending insurance claims and unsettled disputes with providers, the precise amount of medical treatment liability, if any, may not be certain at the time marital property and debts are divided.

Your responsibility for your ex's future legal judgments stemming from ongoing or potential civil suits for personal injuries, property damage, unpaid debts and breach of contract claims -- to name a few -- depends on the laws of your state. Even if the accident or event giving rise to the potential liability occurred during the marriage and appears to qualify as a marital debt under your state's laws, you may be able to exclude the contingent liability from being treated as marital debt if the act that gave rise to the liability could be classified as misconduct such as fraud, drunk driving or reckless spending.

Contingent liabilities create problems when deciding how to divide marital property and debts because they can alter a party's financial position months or years after the divorce case is closed. In some states, even a separate debt -- one incurred before marriage begins or after it ends -- can affect how a court divides marital property and debts. The amount of contingent liability for debts also influences a party's ability to pay, or the need to receive, spousal or child support, so it is important to resolve as many contingent liabilities as possible before finalizing your divorce.

Divorce is never easy, but we can help. Learn More
The Liability of Medical Bills During Divorce in Florida

How Will it Affect Me if My Husband Is Going to File for Bankruptcy Before We Divorce in California?

Your husband's decision to file for bankruptcy, either before you file for divorce or before your divorce is final, can negatively affect you in several different ways. Because California considers property acquired during the marriage to be shared marital property, family assets may be seized to pay your husband's debts; creditors also will come after you for all marital debts since his liability will be discharged by the bankruptcy. Your husband can even discharge his obligations under an existing property settlement agreement.

Are Savings Accounts Frozen During a Divorce in North Carolina?

As a spouse contemplating divorce in North Carolina, you are likely consumed by the necessary issues that must be resolved -- such as property division, alimony and custody -- before a court will terminate your marriage. However, even before addressing these matters, you may need to take steps to protect marital assets, like money held in savings accounts, or your assets will be at risk if your spouse depletes or siphons off the funds before or during the divorce. Freezing your bank accounts is one way to keep this from happening.

Am I Liable for a Spouse's Debt Prior to a Divorce During Separation?

When couples decide to end their marriage, not only must they sort through the emotional entanglements that come with ...

Who Pays the Debts in Texas Divorces?

Texas is technically a community property state, but when it comes to divorce, it does things a little differently from ...

Can You File Bankruptcy on Bills Obtained in a Divorce Settlement?

Sharing the responsibility for paying bills is a fundamental part of most marriages. If a couple divorces, the parties ...

Social Security disability benefits are paid by the federal government to former workers who have become disabled. ...