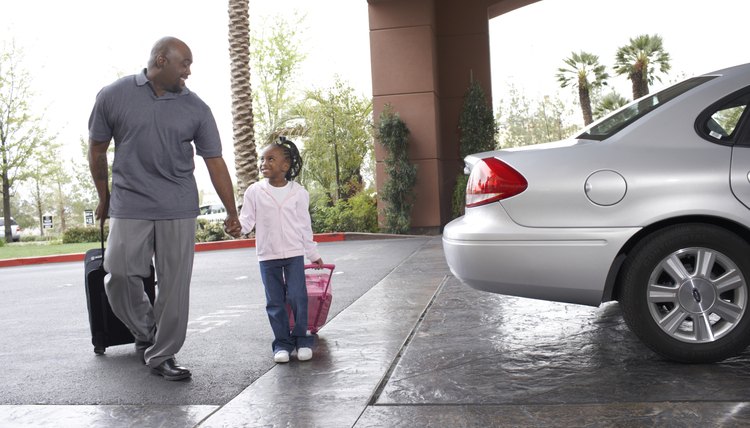 Most divorce agreements contain a parenting plan that explains which parent is the custodial parent and how often the noncustodial parent has visitation with the children. Whether parents create their own parenting plan or a judge creates it for them, both parties are bound to it and must follow it. Legal custody is often awarded to both parents. This refers to the right to make major decisions on behalf of the children, such as where they will go to school, what religion they will practice and what medical procedures they will have. Parents granted joint legal custody share these decisions. Physical custody refers to which parent the child resides with. Joint physical custody occurs when both parents spend a significant amount of time with their children.

Relocating Out of State

A custodial parent is not permitted to relocate with her children outside of the state without the approval of the noncustodial parent. Also, if both parents share physical custody, neither of them are permitted to relocate with the children without the consent of the other parent. In addition to the other parent's consent, most states require a court order before a divorced parent can move with her children out of the state. This protects the other parent's right to see the children and prevents parental kidnapping.

If a custodial parent moves the children out of state, this normally violates the divorce agreement. The noncustodial parent has several options. First, he can contact the police to see if they will retrieve the children. This is best accomplished by contacting the police department where the children have been removed to instead of the parent's local police department. If this is unsuccessful, a noncustodial parent must go through the court system and file a motion to compel the return of his children. Oftentimes, parents also have the option of filing criminal charges against their ex for parental kidnapping and interference with custody.

If your ex has relocated out of state with your children, you can file a motion to enforce the custody agreement in the courthouse that issued your original divorce decree or custody order. In the motion, you would explain your custody arrangement, attaching a copy of any related court orders or agreements, and detail your side of the story along with how you know your ex has moved with the children without your consent. You must serve your ex with a copy of the motion as required by the court, often by certified mail or personal service. The court will then set a hearing date. On that date, you would appear before a judge and answer any questions. Afterward, the judge will decide whether or not the children should be returned.

The Uniform Child Custody Jurisdiction and Enforcement Act, also known as the UCCJEA, is a series of laws that pertain to interstate child custody matters. Most states have adopted the UCCJEA. Under this law, state courts must honor the custody orders of other states. This is called "full faith and credit" and it applies between all states that have adopted the UCCJEA. The UCCJEA also defines a child's "home state" as the state where the child has lived for the last six months. The home state is important because this is the state that is permitted to hear matters concerning the custody of that child. Therefore, if your child lived with his custodial parent in California for the past ten years and then the custodial parent and child move to New York, California will be deemed your child's home state. After six months have passed, New York will be considered the child's new home state and New York courts are permitted to hear any custody actions. The UCCJEA is also important because it creates a registration system for custody orders when one parent moves to another state and it gives local law enforcement permission to intervene when you suspect that a parent may move away with your children without your consent.

Divorce is never easy, but we can help. Learn More
How to Petition a Court in a Different State for Child Visitation Rights

Your divorce court distributed custody of your children based on your family’s circumstances at the time of your divorce, but circumstances often change after divorce. If you are the custodial parent and plan to relocate, Indiana law, which changed in 2006, requires you to provide notice to your ex-spouse so he has an opportunity to object to the move.

"Liberal" is one of those terms in divorce law that has no quantifiable meaning. It applies to the custody terms of ...

Adults are accustomed to traveling when and where they want. If you share custody of your child with the other parent, ...

What Is the Parental Kidnapping Prevention Act?

The media regularly reports on cases of parental child-snatchings, many occurring post-divorce as parents unhappy with ...