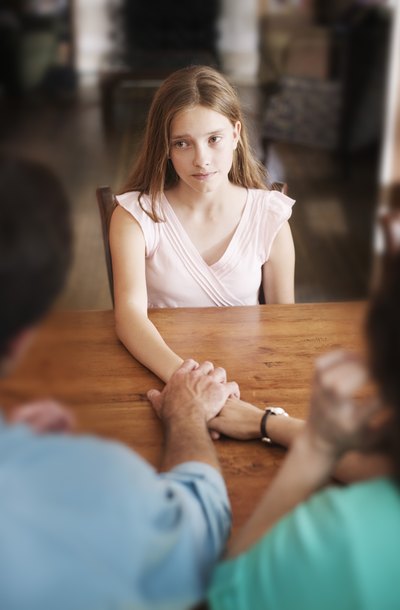 If you and your spouse move into separate households when you decide to divorce, Kentucky law allows either of you to file a motion with the court asking for a temporary custody order. In most cases, this is done after one of you has filed for divorce, but you can do it before filing divorce paperwork as well. If you haven't filed for divorce yet, however, the resulting order will be open-ended because the court has no way of knowing whether you will actually initiate divorce proceedings in the future. Otherwise, the terms of the order are in effect until the court issues your final divorce decree. The parent who doesn't petition the court can file a response to the temporary custody motion and object to the terms as requested by the other parent. If the parent objects, the court will hold a hearing to decide the issues.

When the court issues a final divorce decree – or when parents reach a marital settlement agreement that is incorporated into a decree – it will include long-term provisions for both legal and physical custody of the children. Legal custody pertains to which parent makes decisions regarding a child's health, education and other important issues. Kentucky courts lean toward awarding joint legal custody unless one parent is declared unfit, for example, due to alcohol or drug abuse or domestic violence. This isn't the case for physical custody, called residential custody in Kentucky. Residential custody relates to which parent's home the child lives in most of the time. One parent is commonly named the primary residential parent while the other has visitation with the children. Joint residential custody may be awarded when parents request it, but Kentucky takes the general position that it's not in a child's best interests to bounce back and forth between parents' homes on a consistent, regular basis.

Like most states, Kentucky courts fall back on a statutory list of best interests factors when deciding which parent should have primary residential custody. Judges can consider a child's wishes, but the laws do not cite a firm age when a child is considered old enough to voice an opinion. Best interests factors include consideration of other individuals who also live in the child's primary home, such as siblings, and the child's emotional attachment to them. Courts aren’t likely to uproot a child from his community to live with a parent who has relocated – even just across town if it means the child must change schools. Under Kentucky law, judges must also consider issues of domestic violence when deciding where to place children.

Ideally, you and your spouse can reach an agreement regarding who will act as your children's primary residential parent and you'll be able to share joint legal custody. If this isn't the case, Kentucky's statutes allow its judges to order custody evaluations and to dig deeper into your family's dynamics to determine your child's best interests. The evaluator can interview third parties, such as teachers and physicians, without parental consent unless your child is 16 or older, in which case his consent is required. Kentucky's law specifically states that if one parent leaves the marital home because of domestic violence issues, this can't be held against him and won't constitute abandonment of his children. Judges can adjust visitation schedules in order to minimize contact between parents or eliminate threats to the child if domestic violence is a problem.

Colorado is one of the more progressive states when it comes to time with your children – at least with regard to the terminology included in its legislation. If you're divorcing in this state, you can't ask the court for "custody." That word was eliminated from the family code in 1998. Instead you must prepare a parenting plan and submit it to the court as part of your divorce, delineating who you think should make decisions regarding your children's upbringing. This is called decision-making ability. Your plan must also detail which parent your child will live with on what days, an arrangement called "parenting time." Added together, these are "parental responsibilities."

Family Laws on Sole Custody in the State of Georgia

Except in extreme circumstances, Georgia courts usually will not award sole custody of children to one parent -- at least not officially. Section 19-9-3 of the Official Code of Georgia Annotated specifies that it is the state’s policy to ensure that children have frequent contact with both parents after a divorce or separation. However, the rest of the Code is riddled with provisions that tend to give one parent more rights than the other.

When parents contest custody, it's usually one of the first things a court will rule on in a divorce -- at least ...

Divorcing parents can't deny each other custody, but courts can do so. Judges typically do their best to preserve the ...