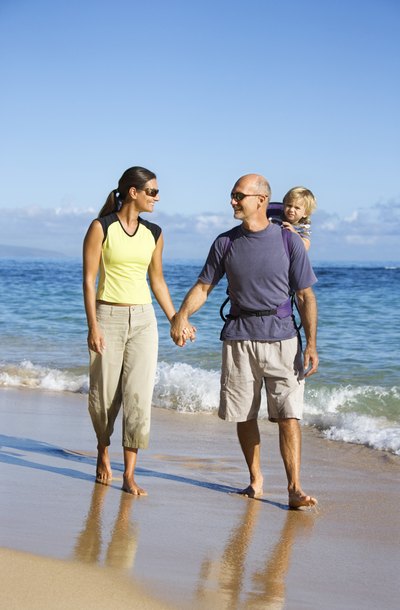 A temporary custody order holds things in place while your divorce is pending, until the court issues a final decree. The fact that a temporary order isn't forever doesn't lessen its importance, however. Its terms set a precedent, and they can sometimes – but not always – carry over to the final order. If you begin dating someone during this time, and if the judge frowns on this, it can affect your final order. If your spouse has temporary physical custody of your kids, and if she's not dating anyone, the court might believe her home offers the children more stability. If you have temporary physical custody, the court might decide to change this arrangement in the final decree if the judge feels that your dating is detrimental to your kids.

Custody terms are never really permanent. The provisions in your decree can be modified post-divorce if there's a change of circumstances. Oklahoma courts tend to look for really significant changes before they'll alter permanent custody arrangements, however. If you lose custody in your decree because you began dating even before your divorce was final, it might be very difficult to get it back. Like all states, Oklahoma bases custody on a list of best interests factors the court must weigh to determine with which parent the children will do best. Stability is important, but Oklahoma's statutes also include reference to a parent's ability to make good and sensible decisions regarding the children. If you're already dating, this may make it appear to the judge that you're putting yourself and your own needs first, unnecessarily exposing your kids to something they're not ready for yet. Your spouse can even amend her divorce papers to charge you with adultery as grounds. This doesn't usually affect custody by itself unless you've exposed the children to your new relationships and they were adversely affected by it, but combined with other best interests factors, it could mean you lose custody.

Effect on Your Kids

Oklahoma courts will consider your children's wishes when determining custody, provided they're old enough to voice a mature preference. Assuming that all other things are equal – both you and your spouse adequately meet the state's best interests standards – your kids' opinions can act as a tiebreaker. If they're old enough to know you're dating and understand what it means and if it upsets them, they might tell the judge they don't want to live with you. Even younger children may have problems with your social life, if only because they don't understand what's going on at such a vulnerable time in their lives.

The court won't decide custody for you if you and your spouse can reach an agreement, instead. Most courts consider it best when spouses devise their own parenting plans – after all, no one understands your children and your family's needs better than you do. Unless you've been separated for years and are only now getting around to ending your marriage officially, dating during the temporary custody phase of your divorce means you've wasted no time in looking for someone new, and this might make your spouse angry and resentful. Negotiating a custody agreement might be impossible, and her anger make her fight you tooth and nail in court if your case goes to trial.

Divorce is never easy, but we can help. Learn More
How Long Can Temporary Custody Last?

Who Gets Kids Before a Custody Hearing?

As long as you and your spouse are living together, you both have custody of your kids. Divorce may be on the horizon. One of you might even have already filed a petition with the court. It doesn’t matter, provided both of you are still residing under the same roof with your kids. Custody usually does not become an issue until one of you moves out, or one of you seeks an order to pave the way for moving out at a later time.

How Does Temporary Custody Work in MO?

There are few hard and fast rules when it comes to child custody and Missouri’s statutes are no exception. Custody decisions usually come down to the opinion of a single judge. The concept of temporary custody is further complicated in Missouri because it means different things in different situations.

Most state courts base custody decisions on the best interests of the children. Many legislative codes are vague about what these best interests are, but they’re relatively uniform in opposing disruption to a child’s life by uprooting him from one parent and placing him with the other without good cause. Temporary custody often leads to permanent custody for this reason. The major distinctions between the two are their duration and a parent's ability to modify them.

Parents always maintain the right to go back to court to change custody arrangements after their divorce is final. The ...

In the context of divorce, temporary custody is truly temporary – it lasts only from the time the order is issued until ...

If I Drop a PFA, Is the Custody in Effect?

If, at any time, you feel an individual is threatening your life, health or well-being, you have the right to seek a ...