Death Benefits During a Bankruptcy

Death benefits, also known as survivor benefits, are typically money from a life insurance, health or accident policy, pension or retirement fund payable to a survivor or designated beneficiary upon the insured person's death. Common survivors and beneficiaries include spouses, domestic partners and children. Whether or not a debtor may keep death benefits after filing for bankruptcy depends on when those benefits are paid and whether they are protected by a state or federal exemption. 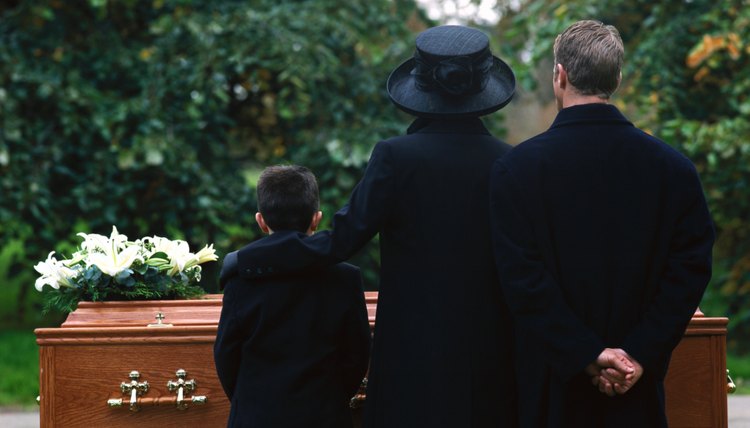 Debtors often file for bankruptcy when they have been unable to find debt relief through other means. Two common forms of personal bankruptcy are Chapter 7 and Chapter 13. In a Chapter 7 bankruptcy, a court-appointed trustee liquidates a debtor's non-exempt assets, if any, and uses the proceeds to pay his creditors. Any eligible debts that remain are discharged, or eliminated. In a Chapter 13 bankruptcy, the debtor is not required to give up his assets; instead, he enters into a repayment plan -- based on his available disposable income -- lasting three to five years. Any eligible debts not paid at the conclusion of the plan are discharged.

When a debtor files for bankruptcy, he creates a bankruptcy estate. The U.S. Bankruptcy Code describes the property included in this estate, which is essentially all property the debtor owns or has an interest in, such as a home or vehicle, at the time of filing. It also includes any property received within 180 days of filing, including proceeds from a "life insurance policy or of a death benefit plan." In other words, if the debtor received, or will receive, a death benefit within 180 days of filing for bankruptcy, it is part of his bankruptcy estate and may be taken to pay his debts in a Chapter 7 bankruptcy or used to calculate his payments in a Chapter 13 repayment plan.

Generally, if a debtor received death benefits more than 180 days before or after he filed for bankruptcy, these funds are excluded from his bankruptcy estate. However, even if death benefits are disbursed within the 180-day period, a debtor may be able to protect these funds through federal or state exemptions. For example, under federal law, a debtor can exempt proceeds from a life insurance policy that insured the life of someone the debtor depended on so long as the funds are "reasonably necessary" for the support of the debtor and any dependents. In contrast, many states provide exemptions that cover death benefits generally, regardless of type. For example, New York exempts death benefits up to an unlimited amount provided the debtor is a spouse or dependent of the insured. Some states allow debtors to choose between federal and state exemptions, while others require debtors to use state exemptions only.

File a DBA for your business online. Get Started Now
Wage Earner Plan Vs. Bankruptcy

Can the Trustee Freeze My Bank Account During a Bankruptcy?

Individual debtors often file for chapter 7 bankruptcy. Once a debtor files the bankruptcy petition, a bankruptcy trustee is assigned to the case and one of his duties is to collect a portion of the debtor's assets, including bank accounts, and use them to pay his debts. Prior to seizing money from a bank account, the trustee first freezes the account to preserve the funds; however, sometimes banks will do this on their own.

When an individual debtor files for Chapter 7 or Chapter 13 bankruptcy, creditors must immediately stop their collection efforts. Creditors sometimes may attempt to get around this ban by petitioning the bankruptcy court to "lift" the stay. A bankruptcy lift allows the creditor to continue collection activity, such as garnishing wages or foreclosing on a home, while the bankruptcy case is in progress.

Veterans injured in the service of their country are afforded financial assistance and protection by the federal government. This includes monthly disability payments to compensate for lost current and future income. The payments are protected from garnishment by most creditors, but California courts include disability amounts as income in determining a veteran's child support obligations.

California Laws on Community Property in a Bankruptcy

California is one of only nine community property states in the U.S. Married spouses who live in those state shares ...

Is it Better to Be on Disability When Filing for Chapter 7 or 13?

If you are on Social Security disability and considering filing for bankruptcy, it can be difficult to choose between ...

How Much Cash Is Exempt in a Bankruptcy?

When debts become overwhelming, debtors may turn to bankruptcy to give them a fresh start. Depending on the type of ...