When a married couple splits up in Colorado, their property is also split between them. The judge's order of dissolution indicates which party is awarded ownership of a vehicle held jointly by the couple, yet this does not automatically change the title. The couple must transfer vehicle ownership with the Department of Revenue. 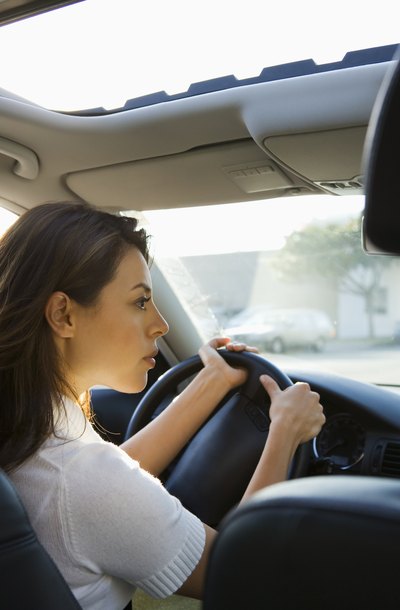 A certificate of title is the official record indicating who owns a vehicle. In Colorado, vehicle titling is handled by the Department of Revenue's Division of Motor Vehicles. Every change of title must be made through the motor vehicles office in your county of residence. Deleting an owner from the title is considered a change of title.

If both former spouses are listed as owners on a certificate of title, both must sign off to release the couple's joint interests after a divorce. The party awarded ownership completes the paperwork in her name as buyer. If a former spouse refuses to sign off his interest, the other party may ask the court to allow the court clerk to sign in his place.

Is a Quitclaim Deed on a House Binding in a Divorce?

Often, a divorcing couple's biggest asset is the home they own together, and this home must be split with their other possessions during their divorce. A divorce court can award the house to one spouse, which often requires the other spouse to sign a quitclaim deed to give his ownership rights to the other spouse. This type of deed is legally binding to transfer ownership, but it does not remove a spouse's name from the mortgage.

Even if you've kept your divorce private, the California Department of Motor Vehicles needs to know. California car owners are required to report any change in ownership to the DMV, and that includes deleting the name of an owner. You have to follow the same procedure as for a vehicle sale, with certain exceptions that will save you money.

The Procedure to Transfer a Business Proprietorship

Equal division of real property, such as the marital residence, in a California divorce often means the home is sold ...

If a divorce awarded you the family wheels, then you'll be responsible for keeping that title document in good order. ...

Meaning of the Legal Term "Rights of Survivorship"

The term, “Rights of survivorship,” refers to a form of property ownership where two or more people -- often a husband ...

DBA as a Sole Proprietorship in Massachusetts

Naming a business is often a very important step from a branding perspective. In Massachusetts, business registrations ...