In a Divorce Am I Responsible for Kids That Are Not Mine?

There are some situations in which you can ask a court to legally terminate your responsibility for supporting children who are not yours after your divorce. Whether you are held responsible for supporting the children depends on the children's legal status as your biological kids, your adopted children, your stepchildren or children born during your marriage who are shown to have been fathered by another man. 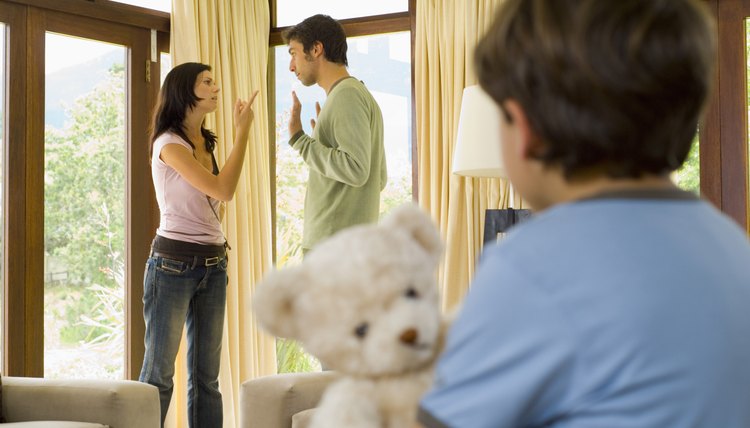 Nineteenth-century American courts followed the British legal principle that children born to a married couple legally belonged to the woman's husband, and he was obliged to help support them after a divorce. Legal adoption appeared in America when Massachusetts passed the first adoption law in 1851. Adoptive parents acquired the same obligations to children after divorce that biological parents had. Stepparents, however, had no legal duty to support stepchildren after divorcing their stepchildren's biological parent.

Current American state divorce law requires that you support any children who are biological children born to you and your spouse during the marriage. You are also required to support any children whom you and your spouse legally adopted during the marriage. The situation is different for stepchildren and for children born during a marriage who were fathered by a man other than the woman's husband.

Your stepchildren -- the biological kids, adopted children and stepchildren that your spouse acquired in another marriage or relationship before marrying you -- are usually not legally entitled to support from you after you divorce your spouse. However, if you signed a contract with your spouse agreeing to provide child support for a stepchild after a divorce, a court will likely compel you to honor the contract.

As a husband, you are not required to support children born during your marriage who were fathered by another man if you did not consent to the situation. If you are planning to contest the paternity of a child born to your wife during your marriage, it is important to familiarize yourself with the paternity laws of the state where you live. FindLaw.com has links to the paternity laws in all fifty states. You can request that the court overseeing your divorce require you and the child to undergo DNA testing. If the child is shown by DNA testing to have been fathered by another man, you are not obligated to support the child after the divorce.

Be aware that even if a child born during your marriage is conclusively proven by DNA testing to be the child of another man, your wife can contest your refusal to support the child by showing a court that you knew during the marriage that the child was not yours and you accepted the situation. For example, you told the child that you were her father, allowed the child to live in your home and supported the child. A court may then order you to support the child after the divorce.

Divorce is never easy, but we can help. Learn More
Laws on False Paternity

As a stepchild, you do not have the inheritance rights of a biological or adopted child. If your stepparent wants to leave you cash, property or other bequests in a will, he or she must specifically include you in the will. Otherwise, it's possible for you to receive nothing, despite your stepparent's wishes.

Many children born during a marriage are the biological children of the husband and wife, but this isn’t always true. On the other hand, it would be disruptive to family life if children born to a husband and wife weren’t presumed to be their biological children. Consequently, North Carolina has laws that presume a husband is the father of his wife’s children. During a divorce, this can give the father rights to custody and visitation and may require him to pay child support.

Can You Receive Child Support if a Child Was Not Legally Adopted?

Child support is financial aid one parent pays to the other as a contribution toward the food, shelter, medical care ...

Common-Law Marriage Responsibilities for Children From a Previous Marriage

If you have entered a common-law marriage and have children living with you who are your spouse's biological or adopted ...

Voluntary Relinquishment of Rights by the Parent

If you are a birth or adoptive parent and considering giving up your parental rights to your child, you are not alone. ...

How Does a Father Get Custody When the Mother Denies Paternity?

Disputes over custody can hit a snag when a child's mother denies that an estranged or ex-husband or lover is the ...