How to Divorce With a Civil Union License in New Jersey

Civil unions, like any other relationship, don't always last. If you live in New Jersey and want to terminate yours, you can, so long as you entered into the civil union in New Jersey or another state that recognizes such relationships. The procedure you will follow is identical to that of married couples seeking a divorce. The only difference is that terminating your civil union is known as a "dissolution" rather than divorce. However, there are a few legal quirks that can make a civil union harder to dissolve than a marriage in some cases. 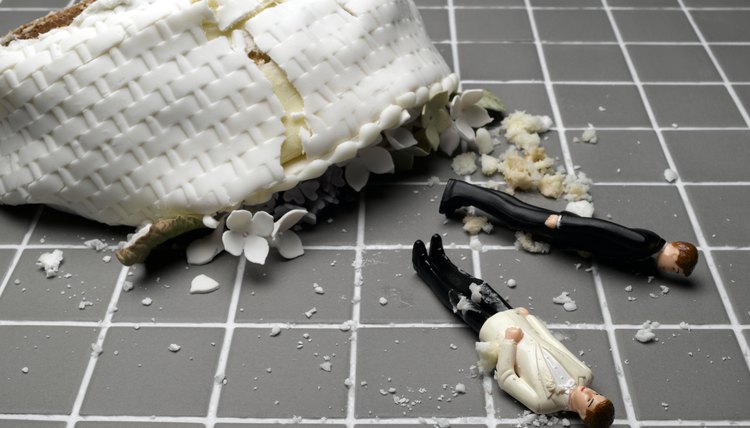 Before you can terminate your civil union in New Jersey, you will first need to meet the state's residency requirements. At least one partner must be a current resident of New Jersey and have lived in the state for at least one year before you may file for dissolution there. Once this requirement is met, you would then file a complaint for dissolution in superior court. In the complaint, you must list your grounds, or reasons, for the dissolution. You may use the same grounds as those available for divorce, such as adultery, separation, substance abuse and extreme cruelty. However, New Jersey's dissolution statute does not list irreconcilable differences among the possible grounds, making an amicable, uncontested dissolution harder to achieve.

After your dissolution complaint is filed and your partner responds after receiving copies of the complaint and any other necessary paperwork, the dissolution process begins. The process moves more quickly and easily when both parties can reach agreement on such issues as property and debt division, alimony, child support and custody. If you and your partner have reached agreement on these matters, you can formalize the terms in a settlement agreement and submit it to the court for approval. If the terms are satisfactory, the court will terminate the civil union and incorporate the agreement into the dissolution decree.

If you are unable to reach agreement with your partner on one or more issues, the dissolution is considered contested. As a result, the court will decide these matters for you. Property acquired by either partner during the civil union is considered the property of both partners. As an equitable distribution state, New Jersey will divide this property between partners in a manner that is fair and just, though not necessarily equal. Separate property -- property obtained before the union or during the union by inheritance or gift to one party -- remains with the partner who acquired it and may not be divided by the court. In New Jersey, same-sex partners are also eligible for alimony when a civil union is dissolved. The court will consider several factors, including length of the union, partners' age, health and income, and parental responsibilities.

When same-sex parents dissolve their civil union, certain issues arise that are unique to this relationship, making the outcome of custody and support issues less predictable. For example, a child in a same-sex family may be the biological child of one partner or the adopted child of one or both partners. Luckily, in New Jersey, if you enter into a civil union and one partner subsequently has a child or one or both of you adopt a child during the union, the court is likely to treat both of you as the child's parents, giving you custody, visitation and child support rights. Unless you reach your own agreement, the court will award legal custody -- the right to make important decisions for the child, such as school, religion and health care -- and physical custody -- where the child resides -- to one or both of you. If physical custody is awarded to one parent, the other parent will likely be awarded visitation as well as ordered to pay child support to the custodial parent.

Although ending your civil union is possible, there are certain realities to keep in mind. If you entered into a civil union in New Jersey or another state, but now live in a state that doesn't recognize such unions, it is unlikely you will be able to terminate the union in that state. You will have to go to New Jersey, or another state that recognizes your union, in order to terminate it -- but you will have to meet the state's residency requirement. As with marriages, you cannot enter into a new civil union until you legally terminate your current one. In addition, states that do not recognize civil unions are also unlikely to treat you as the legal parent of your partner's biological or adopted child unless you formally adopt the child as well.

Divorce is never easy, but we can help. Learn More
Steps for Dissolving a Partnership in South Carolina

How to Convert a Sole Proprietorship to a Partnership in Maryland

In many cases, a business gets off the ground with the work of a single owner operating a sole proprietorship. As the company grows and becomes more profitable, additional owners often come into the picture, which can necessitate a restructuring of the business. In Maryland, new business registrations are handled by the Maryland Department of Assessments and Taxation. However, by law, neither sole proprietorships nor partnerships are required to register. Instead, the conversion process is handled through internal partnership agreements and by amending any existing licenses to include the names of the new owners.

If you are a partner in a general partnership based in California and you want to change the business structure of the company to a sole proprietorship, you can make this conversion with minimal paperwork. Before you proceed, however, it is important to understand the difference between dissociating from the partnership and dissolving the partnership entirely.

How to Dissolve an LLC in Nevada

A limited liability company, or LLC, is an independent legal entity that will continue to exist, regardless of the status of its owners, unless officially dissolved. In Nevada, the managers of an LLC can file articles of dissolution with the state by visiting the Secretary of State's website. The website contains all of the information needed to prepare a filing that complies with the dissolution provision of the Nevada Limited Liability Company Act. The LLC is considered officially dissolved once the articles of dissolution are accepted by the state.

Arkansas is a little different from most states when it comes to marriage and divorce. There are two types of marriage ...

Most states recognize three ways to legally alter a marital relationship -- separation, divorce and annulment. Among ...

New York laws are relatively clear about the standards and procedures for marriage and divorce, including issues of ...