Although all states recognize no-fault divorce, the majority recognize fault-based grounds in addition to their no-fault options. In states that recognize fault grounds for divorce, spousal abuse is marital misconduct and can have some far-reaching implications. Even pure no-fault states -- those that do not recognize any fault grounds at all -- will weigh abuse when deciding issues of custody. The family legislative codes in many states include specific language, terms and conditions for spousal abuse and domestic violence. 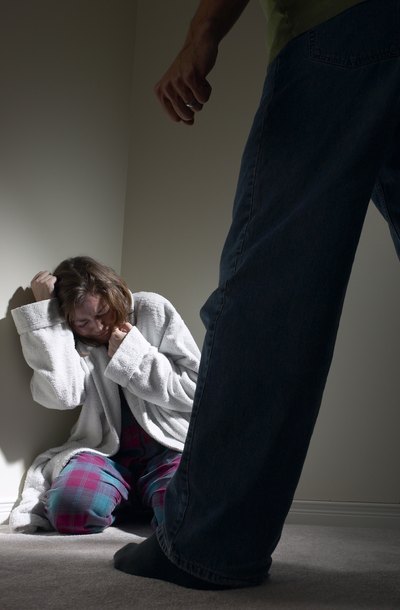 When abuse causes one spouse to file for divorce and end the marriage, and when she uses the allegations of abuse as a fault ground in states, which offer this option, it can affect both property distribution and alimony or spousal support awards. This is especially true when the abuse results in physical injuries and disabilities that can affect a spouse’s ability to hold down a full-time job. The laws make sure a judge can economically compensate the victim for this. Even some “pure” no-fault jurisdictions, which do not recognize any fault grounds, such as the District of Columbia, will consider issues such as spousal abuse when dividing property or ordering alimony, despite the fact that a spouse can’t file for divorce on grounds of abuse or cruelty.

Spousal abuse has the greatest impact on a court’s custody decisions. All states heavily weigh issues of child abuse, but many recognize that spousal abuse can have a negative impact on a child as well. Alaska generally will not grant custody to a parent who has a history of abusing the other parent or anyone else with whom he has lived. The state’s code defines “history” as more than one incident of domestic violence or a single incident where the victim was seriously injured. California has a legal presumption that custody should not be awarded to a parent who has abused the other; this means that the abusing parent has the burden of proof to convince a court that it should not consider the abusive incidents for some reason.

Domestic abuse can also affect a court’s decisions regarding visitation. In circumstances where the abusive spouse harmed the child as well as the other parent, most courts will deny him visitation entirely. In less extreme circumstances, a judge might order supervised visitation, especially if a history of drug or alcohol abuse was the cause of the abuse. Supervised visitation prevents a parent from ever being alone with his child; a responsible third party must be present at all times. Courts will generally not force visitation on a child who does not want to spend time with his other parent if he’s old enough to make such a decision. If the child has witnessed one parent abusing the other and he does not want contact with the abusive parent because of this, judges will often respect that decision.

Punishment for abuse in a divorce proceeding is not always insurmountable. Although property issues and alimony awards based on abuse are generally not modifiable, a parent might be able to rehabilitate himself to restore visitation or custody rights in some states. For example, both Alaska and California courts will occasionally consider granting an abusive parent custody if he completes special counseling, especially if the other parent is unfit for some reason as well.

Divorce is never easy, but we can help. Learn More
Divorce With Children & a Drug Addicted Spouse in Maryland

If you can't reach a custody agreement with your spouse, divorce means putting your family in the hands of a trial court judge. The court has no intimate knowledge of your family to guide a custody decision, so it must fall back on a statutory standard provided by law. This is called the "best interests of the child," and the different states have different lists of factors that a judge must consider in deciding just what the best interests of your child are.

Although state courts are increasingly moving toward joint custody arrangements after divorce, the old standard of one ...

Every state defers to a concept called the “best interests of the child” when deciding custody issues. But different ...