Advances in technology make it increasingly difficult for unscrupulous spouses to get away with anything in divorce litigation. In 2008, the American Academy of Matrimonial Lawyers released the results of a member survey, which indicated that almost 90 percent had noticed a distinct increase in the use of electronic evidence in family law trials. Such evidence is often admissible, but that depends on how you get your hands on it. 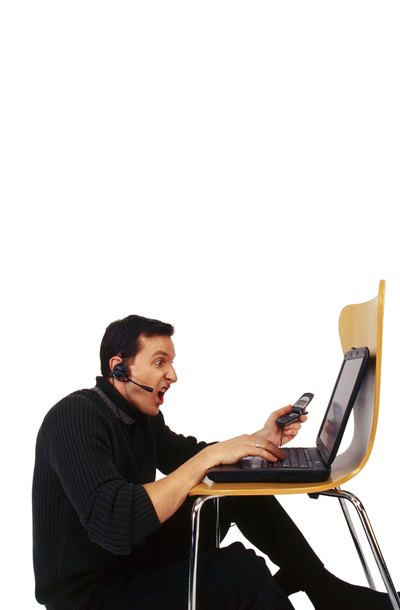 The reasons you might want to use electronic evidence are as myriad as the issues over which spouses battle when they divorce. It may be invaluable in proving character flaws or lack of appropriate parenting skills in custody matters, or it can establish that your ex really isn't so disabled that she can't work and contribute to her own income. It might also reveal that she's been surreptitiously sliding assets from the marital estate into hidden accounts or someone else's ownership. If you can produce proof of any of these sorts of allegations, it may dramatically change the outcome of your divorce. Spouses are often less than cautious when emailing, texting, or visiting social media sites -- and these records may offer a mother lode of usable information. The bad news is that you're still left with the dilemma of accessing the communications in such a way that you can legally get them before the judge.

What you generally cannot do is make use of a program that records your spouse's keystrokes and sends the conversations from her computer to your own. In some states, such as New Hampshire, this is outright illegal, even if you're not going through a divorce. You likely can't use pictures you took with your own phone of your spouse's cellphone or text message screen. If her electronic gadgets -- including her computer, smartphone or tablet -- are pass coded, you definitely cannot meddle with them, trying out all likely letter and number combinations until you discover the password. If you manage to access evidence, you can bet that your ex or her lawyer will ask in court how you got it -- and they'll attempt to have the judge declare that it's inadmissible.

Subpoenas and Other Discovery Methods

In some states, you can file a pretrial motion with the court, asking the judge to order your spouse to turn over her pass codes and other access information to social media websites. If you're very sure incriminating evidence is on your spouse's computer or tablet, you can ask the court to order a forensic examination of the hard drive. You can issue a request for documents to your spouse, demanding that she produce copies of her cell phone records. This may offer less-than-powerful evidence, however. For example, it might prove that she called a paramour's number innumerable times, but it won't offer up the contents of her conversations. You can send a subpoena to her cell phone carrier for copies of text messages, but these companies usually only hold onto records of dialogues for a short period of time. If you get lucky, however, a page or two of communications might include some useful information.

Many states require that you must be able to authenticate your evidence before it's admissible at trial. This means that you can prove your spouse sent the message or transmission -- and that it wasn't someone else using her device. In some jurisdictions, even if spyware is illegal, this may not preclude a divorce court from accepting it as evidence; its legality and its effect as evidence are two separate issues, but it usually comes down to the discretion and opinion of a particular judge. Your ex could also press criminal charges against you outside the divorce litigation. If you're not using a lawyer for your divorce, you might want to consult with one about the ramifications before you pop up in court waving a handful of incriminating electronic evidence that may cause you more trouble than it does your spouse.

Divorce is never easy, but we can help. Learn More
Can Email Messages Be Used in Divorce?

As a general rule, if someone has an affair with a married individual, she should brace herself for an appearance in divorce court. Ultimately, however, it comes down to the rules in your particular state. If you live in one of the jurisdictions that does not recognize fault grounds, the issue of adultery is often moot. Otherwise, if your spouse files on grounds of adultery, she must prove her allegations through testimony and other evidence.

With all states now offering some form of no-fault divorce, the necessity of hiring private investigators to get the ...

Can Documents Obtained by a Private Investigator Be Requested as a Discovery in a Divorce Case?

If you suspect that your soon-to-be ex will go to any and all lengths to dig up information to influence your divorce ...

It may seem blatantly unfair that your spouse could end your marriage, either by committing adultery or physical or ...

How to Obtain Telephone Records in a Divorce

Whether you’re trying to prove that your spouse is having an extramarital affair or that he’s siphoning money from your ...