As you go through the divorce process, you and your spouse will work to divide all marital property, including debts, assets and real property. Spouses can either come to an agreement privately through a marital settlement agreement or go through the court system where a judge will divide property according to state law. Some states, known as community property states, divide marital property equally between spouses. Most states, however, distribute property equitably between spouses, not necessarily equally, after evaluating several factors, such as the duration of the marriage and each spouse's age and contributions to the marriage. With vehicles, the asset is typically awarded to one spouse and requires refinancing and retitling of the property. 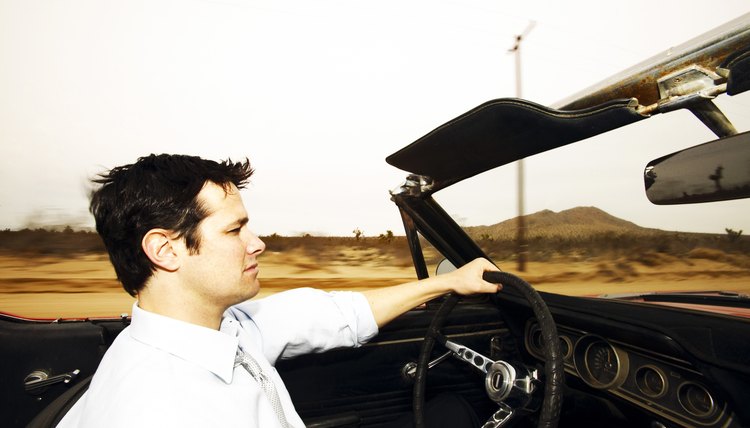 The nine community property states are Arizona, California, Idaho, Louisiana, Nevada, New Mexico, Texas, Washington and Wisconsin. If you live in a community property state, the value of the vehicle, and any underlying debt, will be split 50/50 between both spouses. Practically speaking, however, courts in all states are more likely to award a vehicle to the spouse who primarily used it, assigning the underlying debt to that spouse as well. If the spouse cannot afford the car payment after the divorce, the judge may order the vehicle sold and the proceeds used to pay off the car loan. If the vehicle was bought before the marriage, it will not be included in the division of marital property and ownership will remain with the spouse who made the original purchase.

Value of the Vehicle

In equitable distribution states, the division of assets must be fair to both sides. If one party retains ownership of a vehicle that is worth far less than another family vehicle kept by the other spouse, the judge may award additional property to that spouse to offset the difference. The assignment of debts between spouses must also be fair based on factors evaluated by the court, such as each party's earning potential and post-divorce employability. If an unbalance arises in a community property jurisdiction and the judge cannot make a 50/50 split of vehicles, he may order the sale of the cars and an even division of the proceeds. The same is true regarding the underlying debt.

If spouses entered into an auto loan together during the marriage, one spouse will likely request to be removed from liability on the loan after the divorce. This will require the parties to refinance the loan to only name one spouse responsible. A post-divorce refinance could present a problem if the receiving spouse's credit is imperfect or the lender refuses to remove the other spouse's name. While a creditor can still technically commence legal action against both spouses named on the loan for the outstanding balance, many marital settlement agreements contain an indemnification clause releasing the other spouse from liability or costs incurred in the event of a default.

Every vehicle comes with a title proving ownership. If the settlement names only one spouse as the owner of the vehicle post-divorce, it will be necessary to obtain a new title from the department of motor vehicles. Many states require proof of divorce before the retitling process is permitted, which will include an application for new registration as well. You will need the original title for this process as well as proof of the vehicle passing any and all state-required inspections. Fees associated with retitling generally include an excise or transfer tax, filing fee and registration fee.

Divorce is never easy, but we can help. Learn More
Does a Divorce Decree Nullify a Car Title?

If a divorce awarded you the family wheels, then you'll be responsible for keeping that title document in good order. The local department or registry of motor vehicles -- it goes by different names in different states -- is the place where you can change, add or delete names from a vehicle title; you'll just have to take a number, bring any required paperwork, and follow procedure. A phone call to your car lender and the auto insurance company may also be in order.

If the court awards you the family car in the divorce settlement, it may give you the car loan, too. If you and your spouse are both on the loan, the court may require you to remove your spouse's liability for repayment of the loan. This usually involves working with your bank to refinance the loan or pay it off.

Can I Assume a Mortgage After Divorce?

Two incomes are better than one when it comes to making mortgage payments. Divorcing couples become well aware of this fact when struggling over who will continue making mortgage payments on their marital residence. Even though a divorce decree may be relatively easy to obtain when both spouses are agreeable, getting a lender to agree to a mortgage assumption or modification of the terms of a loan may be more difficult.

When a couple separates, they must separate their personal lives, their finances and their property. During marriage, ...

Can a Husband Take a Family Car During a Divorce?

When couples divorce, they must split their property, including assets like cars, bank accounts and the family home. ...

Credits cards are a common way to purchase items when you need them. If you are married, you may not give a second ...

Divorce & an Underwater Mortgage That a Spouse Refuses to Sell

Divorcing in tough economic times can be a real challenge. Often, a couple’s most valuable asset is their home. When ...