Divorcing couples have to find a way to split their assets, including the marital home, as part of the divorce procedure. If one spouse plans to live in the home after the divorce, the court can order, or the spouses can agree to have, the spouse who remains take over the financial responsibility of paying the mortgage. However, there are few laws that specifically govern refinancing for a divorce situation and such refinances can be complicated. 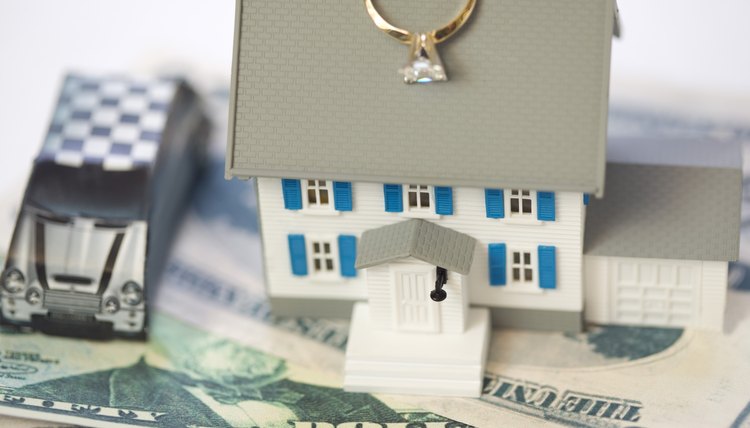 Refinancing is often the best option for spouses when one spouse intends to take over the house and the mortgage following a divorce. Generally, the spouse who gives up the home completes a quitclaim deed giving up any rights he has to the home, while the other spouse refinances the mortgage in her name only. The refinancing process is typically the only way to get the releasing spouse's name off the mortgage as well as the deed. However, it is up to the spouse who keeps the house to obtain a new mortgage on the house.

Refinancing can sound like a great plan, but it might hit a snag when the spouse who wants to refinance applies for a mortgage and discovers that he doesn't qualify for a loan on his own. Because banks are not required to comply with a divorce decree, a judge cannot force a bank to offer the refinancing party a new loan if he doesn't qualify. Thus, a divorce decree can indicate that a party needs to refinance, but the refinance may not be possible. To prevent this problem, spouses can check out their refinancing options early in the divorce process. If a spouse cannot refinance the home into his own name, the couple may have to sell the house and split the proceeds, or, if the house is under water, split the remaining debt.

If a Spouse Fails to Refinance

When a divorce decree requires a spouse to refinance, he must at least attempt to do so. If he tries and cannot refinance, the couple can return to court for a modification to their decree. If a party refuses to try to refinance, forcing his ex to remain on the mortgage, the party who wants out of the mortgage can return to court to ask the judge to enforce his decree. A judge can find the party who is refusing to refinance in contempt of court, issuing fines and even jail time for repeated refusals to follow the divorce decree.

Divorce is never easy, but we can help. Learn More
Does a Divorce Settlement Require a Refinance on an Upside Down Mortgage?

Michigan couples, like couples around the country, must split their marital property when they divorce, including the marital home. Since a house can't be divided down the middle, couples sometimes decide to split the value of the home; one spouse keeps the home and the mortgage, while the other gets her share of the equity in the form of a buyout. The spouse who gets the buyout signs a quit claim deed to give the other spouse full title to the home.

Refusal to Give the Title in a Divorce

If one party to a divorce refuses to give over title to a joint piece of property, the process to handle the problem varies depending on where you are in the divorce process. Refusing to agree to give title over to the other spouse during settlement negotiations is handled differently from a refusal to obey a court order to give over the title.

Can I Assume a Mortgage After Divorce?

Two incomes are better than one when it comes to making mortgage payments. Divorcing couples become well aware of this fact when struggling over who will continue making mortgage payments on their marital residence. Even though a divorce decree may be relatively easy to obtain when both spouses are agreeable, getting a lender to agree to a mortgage assumption or modification of the terms of a loan may be more difficult.

How to Be Released From a Mortgage in a Divorce

For many divorcing couples, their home is the biggest asset to be split -- and the biggest debt. Even spouses who can ...

Can a Husband Take a Family Car During a Divorce?

When couples divorce, they must split their property, including assets like cars, bank accounts and the family home. ...

Does a Divorce Decree Nullify a Car Title?

A divorce decree is a court order signed by a judge when she grants a divorce. Depending on the circumstances, the ...