Does a Durable Power of Attorney Need to Be Notarized? 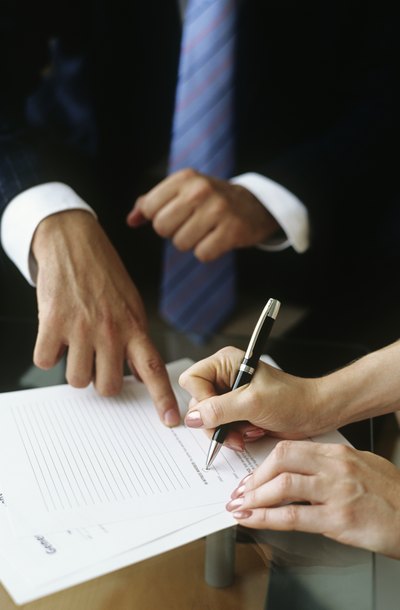 A durable power of attorney may be specific to a particular transaction, such as selling a specified vehicle, paying bills or depositing checks into an account. Alternatively, it may be general and apply to a wide range of transactions, allowing the agent to sell property, liquidate investments, sign legal documents or perform any other acts allowed by law. If a power of attorney is being used to sell or mortgage a home or other real property, whether general or specific, most state laws require that it be notarized. Many also require that the document be recorded in the land records. In California and Washington, for instance, a power of attorney does not require notarization. However, when used to convey real estate, California and Washington require notarization for this purpose.

State laws vary as to what constitutes a legal in-state acknowledgment of a signature. In Maryland and Florida, for example, a power of attorney must contain the signatures of two witnesses in addition to being notarized. If the notary acknowledgment for a power of attorney is not properly worded according to the state laws where signed or being presented, the document may be refused as legally defective.

Ready to appoint a power of attorney? Get Started Now
Power of Attorney Legal Forms for Alabama

How to Obtain Power of Attorney

You may face circumstances that require you to perform legal acts, such as withdrawing money from a bank account or consenting to medical treatment, on behalf of another person, known as the principal, who cannot perform these acts himself due to disability or other adverse circumstance. A valid power of attorney will allow you to perform these acts as agent for the principal without legal liability. Hospitals and banks often offer standardized power of attorney forms that have been drafted in accordance with state law. Otherwise, you may draft the appropriate form yourself.

A power of attorney grants someone else the power to perform legal acts for you, such as consenting to medical treatment or signing a contract in your name. Some states require the use of statutory forms for certain purposes, and some websites offer optional templates that you can use. You can use a power of attorney that you drafted yourself as long as it complies with state law.

A uniform law is a proposed law drafted by the National Conference of Commissioners on Uniform State Laws, a private ...

Does a Durable Power of Attorney Require Witnesses?

A durable power of attorney is a document that authorizes your appointed agent to sign documents and perform other ...

Two Types of Power of Attorney

Although powers of attorney documents serve many different purposes, they can be divided into two broad categories -- ...