You can ask a Michigan probate judge to enforce court orders concerning probate estates, trusts, guardianships and conservatorships. A Michigan probate court judge, like all judges, has the power to issue orders to carry out the business of the court. Michigan law also gives probate judges powerful tools to enforce court orders if parties fail to honor them. 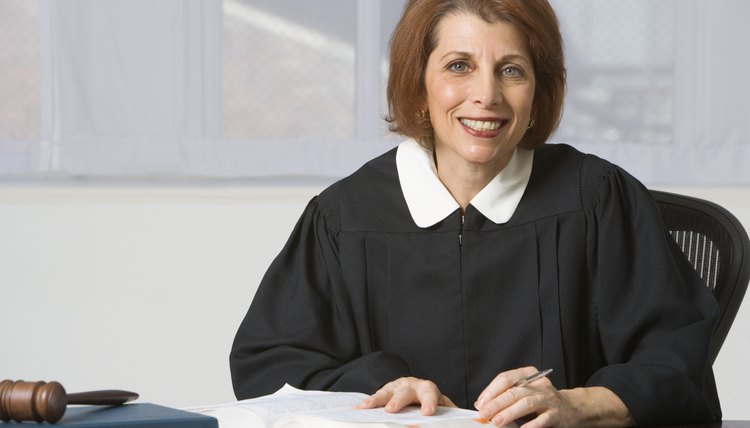 A court order is a document signed by a judge requiring a party to take, or refrain from taking, specific actions. For example, a probate judge may order a bank to transfer certain account funds to a court supervised trust. Or, she may order a minor child's guardian to stop traveling with him overseas to protect his health. Court orders are commands, not requests. Therefore, violating a court order can result in serious, legal consequences.

Motion for Show Cause

Generally, enforcement of a court order begins with a party in a case filing a motion for show cause. Motions are requests to go before judges to ask for action against parties who violate court orders. The judge reviews the allegations listed in the motion, and if she believes a violation has occurred, the court schedules a date and time to rule on the matter. The moving party must have a process server, court officer, bailiff, or sheriff serve the motion and notice of hearing on the accused party.

Show cause hearings are special proceedings conducted by judges when court orders are disobeyed. Judges may enforce their orders by giving violating parties second chances to comply. If parties continue to be uncooperative, or if the judge determines it is appropriate, he can go so far as to send the party to jail to enforce his order. It is important to appear at show cause hearings. Generally, judges issue bench warrants for arrests against parties who fail to appear.

Judges can hold parties in civil contempt for violating court orders and hold the violating party in jail until he complies with the order. The judge can also force the party to pay the costs of any damages his violation caused. The case may be referred to the local prosecuting attorney for more serious criminal contempt of court charges. Michigan penalties for criminal contempt include up to 93 days in jail, probation, fines, and a criminal record.

Protect your loved ones. Start My Estate Plan
Divorce Laws on Blocking Contact With a Minor Child in Colorado

California courts, like the courts in all states, have the power to issue orders to the parties in a lawsuit, including parties to a divorce. Willful violation of a court order is an offense known as “contempt of court.” California courts may issue various orders with respect to a divorce proceeding, including orders compelling all parties to comply with the court’s previous directives.

Time to Probate a Will in Texas

A Texas decedent's estate must be probated under most circumstances. To go through probate, the will's personal representative, or executor, must file it for probate in the county in which the testator resided at the time of death. In Texas, the personal representative usually has four years to probate the will.

When a person dies, the representative of his estate needs to be able to put all his affairs in order in accordance ...

What Happens When a Creditor Is Sanctioned in a Bankruptcy Case?

Debtors typically file a bankruptcy case to get relief from creditors and overwhelming debt, and bankruptcy laws ...

Maryland Statute of Limitations for a Will

A person who drafts his will is known as a testator. A will is the legal document that names one or more persons to ...