Examples of Fair Use Copyright Laws in the Classroom

Copyright laws protect creative works such as photographs, paintings, poems, books and essays. The copyright gives the owner the exclusive right to make and distribute copies, sell and perform works based on the protected work. However, there are some exceptions that allow others to use the copyrighted work without violating copyright laws, including an exception for fair use in classrooms. 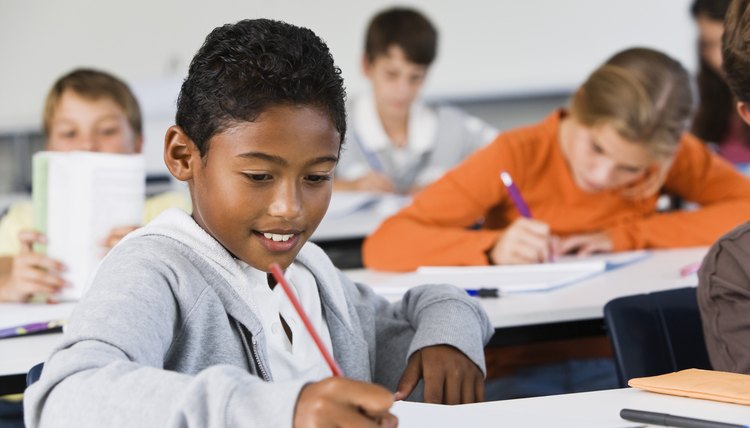 Fair use is an exception that allows parts of a copyrighted work to be used without the owner's permission. Teachers and others must balance fair use principles to determine whether their proposed use will qualify for a fair use exception. These factors are the purpose and character of the use, nature of the copyrighted work, amount used and effect of the use on the market for the copyrighted work. For example, a teacher's use of one line from a poem to inspire students to create their own poems is likely to be considered fair use while duplicating copyrighted poems for sale in a school fundraiser is likely not fair use.

Protect against infringement by registering a copyright. Get Started Now

Copies cannot be used as a substitute for purchasing a copyrighted work and there are instances in which copying clearly does not qualify as fair use. For example, if a teacher copies an entire text because her budget does not allow her to purchase textbooks for each child, she has likely violated copyright law. Teachers also cannot reproduce videos for classroom use, though they may be able to use videos in the classroom and can make copies for archival purposes if replacements are unavailable or available only in obsolete formats.

Some works are considered public domain and, as such, are not copyrighted. These works can be used freely by teachers without concern that they are violating copyright laws, and teachers do not have to worry about fair use when using works in the public domain. These works include items created by federal government employees as part of their jobs, such as manuscripts from the Federal Writers' Project or other written or photographic material produced by persons working for federal agencies. Teachers can copy these works for classroom projects or other classroom use without first obtaining permission.

Protect against infringement by registering a copyright. Get Started Now
Exemptions for Fair Use of Copyrighted Works

Copyright law protects all aspects of an artistic work, as long as the work is original and has been reduced to a tangible medium. Song lyrics, for example, are protected as soon as they are recorded, whether in audio or written form. Although you don’t need to register your song lyrics with the U.S. Copyright Office to enjoy copyright protection, registration makes it easier to prove that you wrote the lyrics before the infringer did and allows you to collect damages without proving economic harm.

U.S. copyright law gives an author the exclusive right to duplicate and distribute her original work for a certain number of years. These exclusive rights are limited by the public interest in ensuring materials can be freely reproduced in an educational context. During debate about revisions to the copyright law, a House of Representatives ad hoc committee reached an agreement with the Authors League of America and the Association of American Publishers regarding the use of copyrighted works in nonprofit educational institutions. Portions of this agreement were later codified in the 1976 Copyright Act.

How Long Can a Sample Be Before You Need Copyright Permission?

It is a myth that you can sample a particular length of work, such as four bars or seven seconds of a song, without getting into trouble with copyright protection laws. The law is a bit more complicated. It is best to ask permission from the copyright holder before sampling a piece of music or other copyrighted materials, such as literature, film or artwork. If your use of another's work falls under the category of "fair use," you may be able to use it without permission, but if you're wrong about how much of the original work you're allowed to sample, you could face serious fines in court.

Using materials created by other people in a school project isn't necessarily a violation of the copyright laws. ...

About Copyright Laws for Movies

A copyright provides a legal monopoly on an original work of authorship, allowing the copyright holder to sue anyone ...

Can You Use Copyrighted Material in Advertising?

Copyright laws protect a creator's right to his original work -- and limit others from using that work. Copyrighted ...