How to Figure Alimony Payments in Iowa

After divorce, one spouse is sometimes left without financial resources to support herself, but alimony -- sometimes called spousal support -- can help. An Iowa court can award alimony to either spouse based on certain statutory factors. However, unlike child support, it is not awarded according to a formula or percentage of the other spouse’s income. 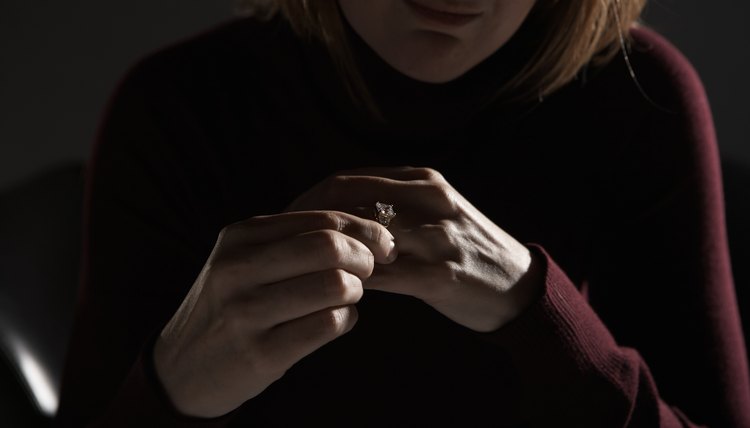 In Iowa, alimony is a payment that replaces a spouse’s legal obligation to support his spouse during the marriage and it must be court-ordered. Spouses do not have a right to receive alimony, and alimony is not ordered in every case. Whether the court in your divorce will award alimony depends on the circumstances of your marriage and whether you and your spouse are capable of supporting yourself.

Iowa courts may award three types of alimony: traditional, rehabilitative or reimbursement. Traditional alimony is awarded permanently, generally in cases where the spouses were married for many years, during which one spouse stayed at home while the other worked outside the home. If the dependent spouse cannot support herself, often because of many years spent outside the workforce, the court could award traditional alimony. Rehabilitative alimony is awarded for a period of time that will allow one spouse to receive training or education to become capable of supporting herself. Reimbursement alimony is awarded in cases where one spouse contributed significantly to the other spouse’s earning potential, such as a wife who works to put her husband through medical school.

Iowa does not use a formula to calculate alimony in every case. Rather, Iowa courts look at various factors to decide whether alimony is appropriate in each case and, if so, how much the court should award. Factors include the length of the marriage, health of the spouses, how the marital property is to be divided and each spouse’s earning capacity and education level.

An Iowa court can modify an alimony award if there has been a substantial change in circumstances since the alimony was originally ordered. A substantial change in circumstances could include dramatic changes in employment, changes in one spouse’s needs or a spouse’s remarriage. For example, when a spouse supported by rehabilitative alimony has completed her education plan early, the paying spouse may ask the court for a modification to end the alimony early. Similarly, if the supported spouse remarries, the paying spouse may ask for a modification since the supported spouse now has other means of support.

Divorce is never easy, but we can help. Learn More
Alimony Laws in Tennessee

Alimony is never a sure thing in a divorce. In most states, it comes down to the discretion of a judge. Congress has passed the Uniform Marriage and Divorce Act to address alimony, but it includes suggestions for awarding it, not hard and fast laws. One common guideline is the length of a marriage. Judges most commonly award alimony after long-term marriages and almost never after marriages of just a few years’ duration.

Are VA Disability and SSDI Divorce Assets for Alimony in Wisconsin?

Alimony -- simply called maintenance in Wisconsin -- permits maintenance upon divorce based on a number of factors, including the amount of money the parties earn. If a spouse is not working because he is disabled, and he receives disability payments, the Wisconsin courts consider these payments when deciding whether to award maintenance. The courts take disability payments into account because they are a replacement for earnings.

How to Get Your Alimony Reduced in SC

If your judge ordered you to pay alimony in your South Carolina divorce, his order is likely based on the circumstances of both you and your spouse at the time of your divorce. Depending on the type of alimony your judge awards, the court may change the alimony payments if your circumstances change significantly; however, your judge has discretion in whether or not to change the award.