How to Fill Out a Power of Attorney 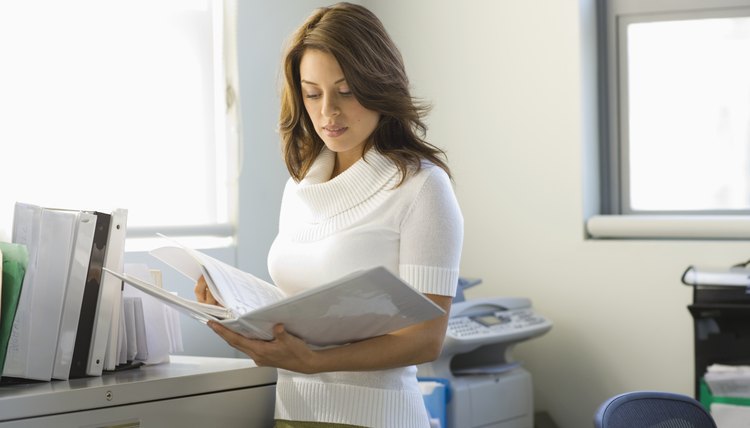 Locate Power of Attorney forms. These can be found online, at libraries, and at some stationary stores. Enter the full legal name of the person giving the authority on the "principal" line. Write the person's current home address after her name.

Enter the full legal name of the person receiving the authority on the "agent" or "attorney-in-fact" line. Write the agent's address after his name.

Read the instructions for the provisions section carefully. Power of attorney forms vary by state, as does the format for designating the agent's powers on the power of attorney form. Some forms require the principal place her initials next to each type of power she wants to give, while others require she initial and cross out only powers she doesn't want to give. Follow the instructions shown on the form.

Locate the space provided for other powers not listed on the form. Insert any additional powers the principal wants to give the agent using clear wording. For example, if the principal wants the agent to be able to give cash gifts of $2,000 of less, don't just put "Give gifts" in the other powers section, as that doesn't limit the amount or type of gifts the principal can give. Use clear wording such as, "Give cash gifts of $2,000 or less only."

Enter the date terms of the power of attorney. The document might have a blank space for a termination date -- a date the powers automatically expire -- or you can enter a date. Don't enter a date if the principal wants the powers to go on indefinitely; leave the area blank.

Complete the alternate or successor agent section if the principal wants to name a person who will become her agent if the first agent is unable to act as such. Enter the alternate agent's full legal name and address in the provided space.

Ready to appoint a power of attorney? Get Started Now
How to Obtain Power of Attorney in the State of Ohio

How to Get Power of Attorney in Alberta

How to Stop a Power of Attorney

You can stop a power of attorney you granted to another person by completing a revocation form, and you must do so as soon as possible to prevent the person from acting on your behalf. A power of attorney allows one person, the agent, to act in place of another person, the principal, in various matters, including bank and real estate transactions.

How to Fill Out a General Power of Attorney

You must fill out a general power of attorney correctly. If you make mistakes, you might give your agent powers you ...

How to Change Name of an LLC in California

In California, the main document needed to form a limited liability company is called the articles of organization. If ...

How to Get Power of Attorney in Michigan

A power of attorney is used in Michigan to give one adult the right to handle another adult's finances. If you want to ...

How to Draw Up Power of Attorney Papers

When you execute a power of attorney in favor of an agent, you are authorizing the agent to perform legal acts, such as ...