Florida 1.540 and Denial of Due Process in a Divorce

A divorce is a civil action. As in all civil actions, the parties involved have a Constitutional right to due process of law – the requirement that government take the actions necessary to ensure individual legal rights are protected. One of the ways Florida protects due process is by application of Florida Rules of Civil Procedure 1.540, which allows an aggrieved party to petition for the reversal of a judgment, decree or order, including a divorce decree, based on mistake or fraud. 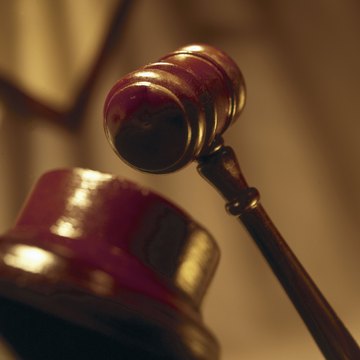 "Due process of law" is a concept that originated in English common law and can be succinctly described as fundamental fairness of judicial process. It includes the right to petition a court for redress of grievances, right to call witnesses and right to face one's accuser. The Bill of Rights requires the federal government grant citizens and non-citizens due process of law. Due process was applied to state governments through the 14th Amendment of the U.S. Constitution and has since been included in the statutory and constitutional law of every state.

Rule 1.540 protects due process by allowing aggrieved parties to dispute and potentially obtain reversal of "final" judicial actions, including divorce decrees that are unfair either because of innocent mistakes, such as clerical errors, or because of culpable misconduct, such as negligence or deliberate fraud. You don't have to be a party to a divorce action to benefit from Rule 1.540. Anyone adversely affected by a judicial action, such as a minor child of divorced spouses, may file a petition for reversal of a judicial action under Rule 1.540.

Evidence establishing fraud or mistake incidental to a judicial proceeding is not enough to reverse a judicial action under Rule 1.540. You must also establish "prejudice." This requires presenting evidence showing it is more likely than not that the judicial action you are protesting would not have occurred absent the fraud or mistake. For example, if custody of a minor child was awarded to a father who concealed evidence of an addiction to pornography, you must establish that if the evidence had surfaced during the custody hearing, the court probably would not have awarded custody to the father.

In addition to showing prejudice, a petitioner under Rule 1.540 must show that he was damaged by the judicial action he seeks to overturn. In Romero v. Romero, a divorced wife sought to set aside a property settlement using Rule 1.540. Although she successfully established that her husband had failed to disclose the existence of stock options that had been awarded to him and although the trial court determined the stock options were marital property, the appeals court denied her motion to set aside the property settlement because she failed to establish her claims that if she had known about the stock options, she not only would have claimed half, but she would have also exercised and sold them then used the proceeds to pay her mortgage.

Divorce is never easy, but we can help. Learn More
How to Get an Annulment in New York

Disputes in a marriage can lead to divorce court or, by individual state laws, to another kind of civil court. States allow civil actions by one spouse against another under limited circumstances, and appeals courts have upheld this right even when a divorce action is ongoing. If the claim is alienation of affection, irreconcilable differences or other strictly marital issues, however, state laws direct the litigants to divorce court.

Can You Appeal a Judge's Decision in Family Court?

How to Contest a Will in Kentucky

The will of a Kentucky resident must be probated in the district court of the county in which the person lived in at ...

Rules to Show Cause for Divorce

A Rule to Show Cause is a court order. It is used to schedule a hearing so that a dispute can be heard by the court. ...