What Forms Are Required to File for Divorce in Michigan?

Michigan has afforded spouses the opportunity to obtain a no-fault divorce since its divorce laws were revised in 1972. Since that time, divorces have been relatively easy to obtain, especially if both spouses agree on all the terms of their divorce, starting with the no-fault ground of breakdown of the marital relationship. The timetable for divorce in Michigan can vary, depending on the complexity of issues and cooperation of the parties. 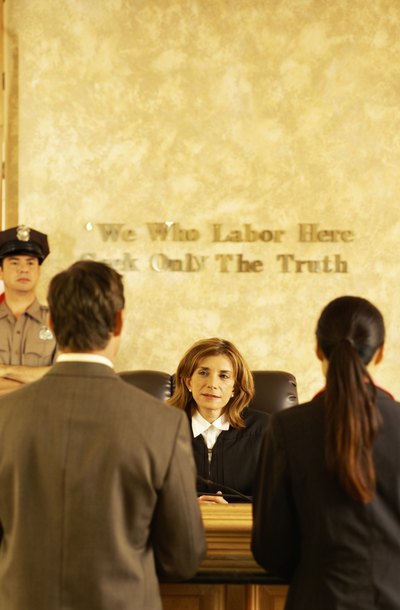 The divorce process in Michigan begins when one party files a complaint for divorce. The complaint will set forth that a "breakdown of the marriage relationship to the extent that the objects of matrimony have been destroyed and there remains no reasonable likelihood that the marriage can be preserved" has occurred. The complaint should also include information about any children born during the marriage and relief being sought, such as child custody and alimony. Court forms distinguish between a divorce with children and without. Once the complaint is complete, the petitioner signs the document; thereby, confirming that all allegations made in the complaint are true. In addition to the complaint, a summons is also filed with the court and sent to the other spouse; it informs the respondent spouse of the divorce action, his legal rights and amount of time he has to answer the complaint. Both forms are filed with the clerk of the circuit court in the county where either spouse resides. The party filing for divorce can either complete and file these forms on his own or have an online legal document provider complete and file the documents for him.

Service of Process and Answer

Once a complaint and summons are filed with the court clerk, the filing spouse must give a copy of these documents to the other spouse, known as service of process, typically through a private process server or certified mail. The petitioning spouse is not permitted to serve the respondent spouse herself, unless the respondent spouse agrees and signs an Acknowledgment of Service confirming receipt. Once served, the spouse has 21 days to file an answer if served personally or 28 days if he was served by certified mail, out of state or through alternate means, such as publication. If the respondent spouse agrees with the divorce and terms set forth in the complaint, he would then file an answer informing the court of his agreement. However, if he contests the divorce or allegations made in the petitioning spouse's complaint, he would instead list his objections as well as propose different terms or relief sought, if applicable, typically in a counterclaim.

If the marriage produced children, the spouses must file additional paperwork which is then used to determine the parents' child custody and support responsibilities after the divorce. For example, a Uniform Child Custody Jurisdiction Enforcement Act Affidavit is required, establishing the home state of the children and court's jurisdiction over them, and completed IV-D Child Support Services Application/Referral form, which helps facilitate the determination of child support through the Michigan Friend of the Court, the agency responsible for overseeing and enforcing child custody and support orders and modifications.

Matters relating to divorce, such as alimony, property distribution, custody and visitation, can be determined by the parties privately through a marital settlement agreement. Once these matters are decided, the court will conduct a short hearing to make certain both spouses understand the terms of the agreement. If approved by the court, the agreement then becomes part of the final divorce order, meaning failure to follow the terms may be considered contempt of court. If the parties cannot agree to all terms of the divorce, a full hearing will be held at which the court will determine the best way to handle each matter.

If the party filing for divorce cannot locate her spouse, she may file a Motion and Verification for Alternate Service. This form requests permission from the court to notify the other spouse of the pending divorce in a manner other than personal service. This may include a newspaper advertisement or posting of a notice in a public area. The filing spouse must make reasonable efforts to locate the spouse before filing this motion and include verification from a process server that attempts were made to locate the defendant.

Divorce is never easy, but we can help. Learn More
How to Serve Divorce Papers

How to File for Divorce With an Ad in the Newspaper

Although state residency requirements vary somewhat, if you are seeking a divorce, you must typically file a petition for dissolution of marriage in the county where you live now, or where you lived as a couple. If you are unable to find your spouse, or your spouse is avoiding service of the petition, you can “serve by publication,” meaning you officially notify your spouse in a newspaper.

How to File for Custody in Illinois

The first step in filing for custody in Illinois is to determine if you have the legal right to seek custody. Any noncustodial parent has the right to seek custody of his child under Illinois law. A nonparent, such as a grandparent, can file for custody only if the child is not in the physical custody of one or both parents. In all custody cases, the standard for deciding who can have custody is the "best interests of the child."

How to Serve a Respondent Divorce Papers in California

In divorce proceedings, one spouse petitions the court for a divorce and the other spouse responds to the petition. The spouse who files for divorce becomes the petitioner and the other spouse becomes the respondent. The filing spouse must notify the other spouse of the pending divorce action, provide him with a copy of the documents filed with the court and allow him 30 days to respond. The formal notification process is called service of process. Court rules for service of process vary from state to state. In California, service can come in various forms: personal service, service by mail or substituted service. Courts require the petitioner to provide proof of service in order to continue the proceedings.

What Is a Summons With a Notice of Divorce?

Spouses can't file for divorce in secret. The other spouse must be notified of the proceedings so he can properly ...

Ohio's Steps for a No-Fault Divorce

Ohio offers two ways to end a marriage: dissolution and divorce. Both processes are similar, but dissolution is often ...

What Is Action for Divorce?

A divorce is legal in nature and proceeds much like any other lawsuit. For that reason, the process for obtaining a ...