Who Gets Custody if My Dad Is a Citizen and My Mom Is Illegal? 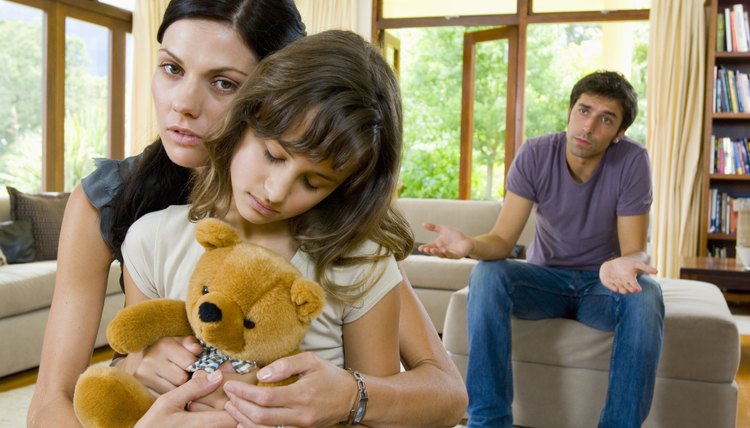 Approximately 85 percent of all immigrant families with children are mixed-status families, i.e. one parent is a legal or illegal immigrant with at least one child who is a U.S. citizen. According to a 2012 Applied Research Center report, "Shattered Families," there are 4.5 million American children in mixed-status families -- one parent is a U.S. citizen and the other an illegal immigrant.

Your mom may be an illegal immigrant for a variety of reasons, most likely because she either crossed U.S. borders into the United States without any legal immigration documents or she stayed beyond the time indicated by the visa stamp on her passport. If your mom and your dad did not take legal steps to obtain an immigration waiver, official permission from the U.S. government permitting her to live in the United States legally, your mom can be arrested and deported by the U.S. Immigration and Customs Enforcement (ICE) agency at any time.

A custody dispute between a U.S. citizen and an illegal immigrant is conducted by family courts in the same manner as a custody dispute between two U.S. citizens. Courts generally award custody using a standard called the best interests of the child, trying to determine whether you would be better off if your parents have joint custody or one parent retains sole custody. A family court will not turn your mom over to ICE.

Your mom's immigration status is usually considered as one item among many different factors in determining whether one or both parents should have custody of you. Each state also has its own set of laws. One court may decide that because your mom could be deported by ICE, your dad should have custody of you unless he is proven to be an unfit parent. Even if a court awards custody of you to your mom, she may still lose custody to your dad if ICE deports her. On the other hand, another court may give custody to your illegal immigrant mom and order your U.S. citizen dad to pay her alimony, child support and assist her in becoming a legal immigrant.

Divorce is never easy, but we can help. Learn More
What Happens if You Are Illegal & Getting a Divorce?

Rights for a Deported Father

An estimated 5.5 million children in the United States have an undocumented immigrant parent vulnerable to deportation. Approximately 4.5 million of these children are U.S. citizens. While deported fathers and mothers retain legal ties to their U.S. citizen children, it is very difficult to enforce these ties once they have been deported.

There are two types of child custody in Maryland: physical custody and legal custody. A parent with physical custody is responsible for day-to-day decisions while the child is living with him; whereas a parent with legal custody makes long-term decisions regarding the child's education, religion, medical care and other major life issues. Although either parent may establish custody rights, drug addiction of a parent may be cause for a court to deny parental rights.

Family court matters are litigated on the state level in the United States, so there are 50 different sets of laws to ...

Can You Marry an Illegal Immigrant Before Divorce?

For most divorcing couples, terminating a marriage isn't as simple as merely signing legal paperwork and permanently ...

Do I Have to Be Divorced to Legally Date?

If you begin dating before your divorce is final, you are technically committing adultery. You’re still married, and ...