Like civilians, Marines get divorced. But only civilian courts can grant divorce petitions, and the divorce process is generally the same for civilians and Marines. But the issues a Marine faces when divorcing can be more complicated than those in a civilian divorce, including finding the correct divorce court and figuring out what benefits the non-military spouse retains after the divorce. Both state and federal laws help sort these issues out. 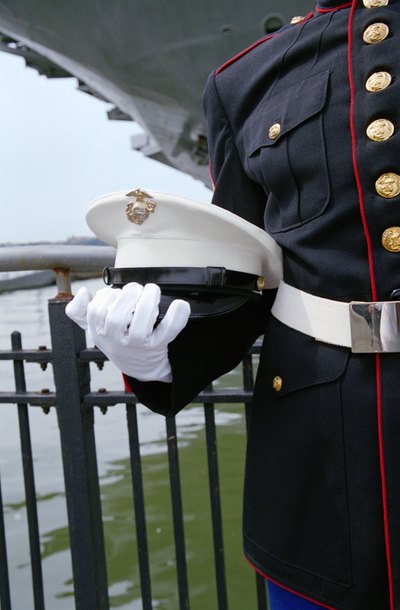 Military divorces must be filed in state courts because neither military or federal courts have legal authority, or jurisdiction, to decide divorce cases. Since Marines may be stationed in one state, claim legal residency in another state and have a spouse who lives in yet another state, it can be tricky to know where to file. Filing requirements vary by state, but a military member or spouse can file for divorce in the state of their legal residence. Before filing in a particular state, though, it is generally a good idea to first verify the particular rules of that state and how they may affect your military divorce.

Marines have special procedural protections under the Servicemembers Civil Relief Act, a federal law. This law allows military members to delay a case by asking for a stay, or postponement, of the court proceedings while they are unavailable to participate in the case because of military duties. Courts must grant an initial stay of at least 90 days, but they have the option to grant a longer stay if appropriate. Thus, if a service member's spouse files for divorce while he is deployed, he may be able to have the case postponed until he returns.

Medical Benefits for the Non-Military Spouse

Retirement Benefits for the Non-Military Spouse

Non-military spouses can be awarded a share of the military spouse's retirement pay. Although federal law allows state courts to split a Marine's military pension, it does not determine how the pension must be divided. There is no minimum number of years a couple must be married before the court can divide the military member's pay. However, for the non-military spouse to receive direct payments from the Defense Finance and Accounting Service, the couple must have been married for at least 10 years, during which the military member must have served at least 10 years.

Divorce is never easy, but we can help. Learn More
Can a Wife Be Deported if She Filed for Divorce?

Members of the United States military and their spouses qualify for a variety of benefits, such as health care, pension, and use of the base commissary and exchange. The Uniformed Services Former Spouses' Protection Act (USFSPA) allows states to treat the former spouse of a service member as a dependent. This means that following divorce, the former spouse can qualify to continue receiving some military benefits. Qualification generally depends on how long the marriage lasted and how long the service member was in the military during the marriage.

Military members must get divorced in state civilian courts, and the basic divorce steps are similar whether the ...

How to Get a Divorce From a Military Spouse in California