Federal tax laws prohibit nonprofit organizations from engaging in partisan political activity. Tax-exempt organizations may run afoul of the Internal Revenue Service if those groups take part in political campaigns for or against a candidate for public office. Nonprofits that violate IRS guidelines and U.S. laws prohibiting nonprofits from partisan political activity risk losing their tax-exempt status and may also incur tax penalties. 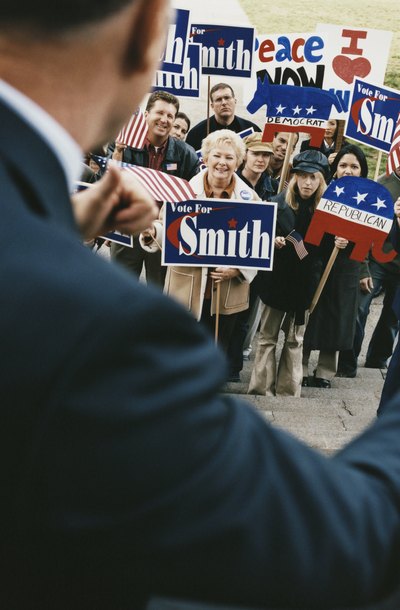 Federal law prohibits partisan political activity by nonprofit organizations, such as charities, private foundations, colleges and churches that enjoy tax-exempt status under the Internal Revenue Code. Tax exemption is a privilege, not a right, and Congress imposed the ban as a condition for a nonprofit obtaining tax-exempt status. Nonprofits cannot campaign for or against a candidate for political office, contribute money or labor to a political campaign or distribute campaign literature. The IRS can punish infractions by revoking the nonprofit’s tax-exempt status and imposing a tax penalty on the organization’s partisan activities.

The U.S. Supreme Court has rejected challenges to laws and IRS regulations barring tax-exempt nonprofits from political activity. Challengers have argued that the laws violate First Amendment protections for free speech, religion and assembly; however, the high court has ruled that the tax laws are a subsidy for speech (the group’s activities), not a restriction on speech. As with any other Congressional subsidy, what Congress gives, Congress can take away. The court said the laws and IRS regulations applied equally across the board to religious and nonreligious groups, and did not prevent religious groups from engaging in religious activity. There’s no ban on nonpartisan lobbying by nonprofits to advance causes on their own behalf.

The IRS permits nonprofits to express views on public policy, so long as they don’t make partisan political comments in the organization’s publications or at official meetings and other functions. Any member or leader of a nonprofit can politick all he wants – on his own behalf. He must make it clear that he is not speaking for the nonprofit. The nonprofit can take part in nonpartisan voter education activities and conduct nonpartisan voter registration drives. A politician can speak at a nonprofit’s event but can’t use the event to campaign for office. The group can’t mention his political campaign or the election and must make clear he’s there to talk about issues other than his political future. A nonprofit can engage in business activity with a politician, such as leasing office space or renting out the group’s mailing list. However, the group must deal with the politician in the same nonpartisan manner as it would do business with anybody else.

Section 4945 of the tax code sets out guidelines on how nonprofits can participate in nonpartisan political activities without jeopardizing their tax-exempt status. Tax-exempt 501(c)(3) charities should review taw laws carefully and consult IRS publications or legal counsel to clarify prohibitions on political activity. The IRS issues revenue rulings from time to time to help organizations better understand how the ban on political activity works. There’s even an online course that the IRS offers to educate charities about how, and how not, to participate in politics.

Until recently, nonprofit organizations were not subject to specific limits on the amount they could spend on salaries, fundraising and other overhead expenses. However, overhead expenditures by nonprofits exempt from federal income tax may come under scrutiny by the Internal Revenue Service, and new legal restrictions on overhead spending are also being put in place by some state governments.

Federal taxes are a significant expense for many businesses, but not for exempt non-profits. Non-profit charities that ...

Can a Nonprofit Business Earn an Income?

Nonprofit organizations are given special tax status because of the benefits they provide to the community through ...

In general, there is no specific legal limit on how many fundraisers that a nonprofit can hold in a year. However, ...

The IRS generally recognizes any distinct legal organization with a recognized creed and form of worship, a formal ...