Jewelry, especially wedding and engagement rings, can be important symbols of a marriage as well as valuable assets, so it’s no surprise that many spouses fight over them in a divorce. Generally, engagement and wedding rings are not divisible in a divorce, but other jewelry and gifts given during a marriage may be considered marital property that can be divided by a divorce court. However, laws vary among states. 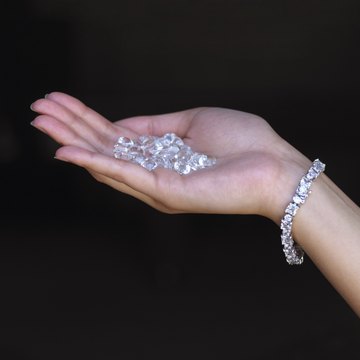 Typically, a court can only divide assets, including jewelry, that are marital property. Certain property, such as that acquired before marriage or by gift or inheritance, is not divisible by most courts in divorce. Engagement rings are not marital or community property because they are gifts given prior to the marriage. Thus, they are considered the separate property of the spouse who received the ring.

In some states, like Florida, all jewelry purchased during the marriage is marital property, including jewelry purchased by one spouse as a gift for the other. As marital property, both spouses have a right to a share of its value, though the exact method of distribution varies by state. Courts in equitable distribution states divide marital property equitably between spouses, though not necessarily equally, based on certain statutory factors. Courts in community property states divide property equally, so the value of the jewelry would be split 50-50.

Since it is impractical to divide jewelry by splitting each piece in half, divorce courts tend to divide the value of each item. A judge might allow one spouse to keep the jewelry she wore during the marriage but offset the value of that jewelry by awarding her spouse other high-value items. If this is not possible, perhaps because the spouses do not have other high-value items, the judge could order some of the jewelry sold and the proceeds split between the spouses. Alternatively, the judge could award more jewelry to one spouse and give her a higher portion of the couple’s debts to balance the value of the jewelry.

Divorce is never easy, but we can help. Learn More
Is a Wedding Ring Subject to Division in Divorce?

How to Determine the Value of Possessions in a Divorce

During a marriage, it is easy to accumulate a lot of stuff. Both real and personal property are typically purchased jointly by married couples, so when the couple decides to divorce, all these items must be divided between them. Courts encourage couples to come to their own agreements about how to divide property and many do so. Methods of valuation vary depending on the nature of the property and whether your and your spouse are negotiating a settlement agreement or preparing for trial.

Identifying a spouse's separate or non-marital property is one of the more complicated aspects of divorce. While hard and fast rules do exist regarding the other spouse's right to a share of such assets, they tend to be subject to a host of exceptions and other rules. Premarital property usually belongs wholly to the spouse who brought it into the marriage and the other spouse has no right to it – unless certain other factors exist.

When couples divorce, any property they acquired during the marriage is divided between them. This includes intangibles ...

Do You Legally Have to Return the Engagement Ring if Getting Divorced?

Most states' legislative codes are pretty concise about how courts divide marital property in a divorce. The problem ...

It doesn’t usually make a lot of sense to invest time, effort and attorney’s fees into quantifying your household goods ...