What Does a Joint Petition Divorce Mean?

Some states allow couples to file joint petitions for divorce, but not all states. A joint petition divorce means the married couple petitions the court for a divorce together. They both sign and file the "joint petition for dissolution of marriage" as a simplified, uncontested or no-fault divorce. They generally agree to proceed with the divorce in a collaborative manner, without major disputes over fault, property division or child custody. Many couples file a settlement agreement with their petition. The judge must review and approve the joint petition and any attached settlement agreement before he enters a divorce decree, or final dissolution of marriage. Court rules on how to file a petition for divorce vary from state to state. 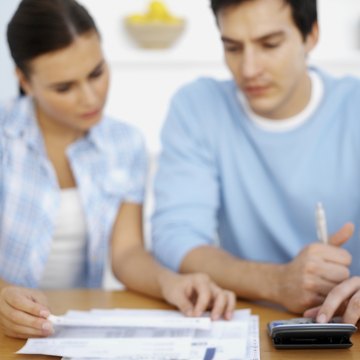 A joint petition for divorce allows both parties to apply for a divorce together rather than separately. In divorce petitions that are not joint, one party petitions the court for a divorce while the other party responds to the petition. The spouse who files becomes the petitioner and the other spouse becomes the respondent. When both parties petition the court together, they submit one petition to the court with both of their signatures. The court may require both signatures to be notarized. Both spouses agree to proceed with the divorce without a determination of fault. If disputes arise after the joint petitioners file for divorce together, the judge may order mediation or schedule a trial to resolve them.

When filing a joint petition for divorce, some states require the couple to simultaneously submit a settlement agreement for uncontested matters. The settlement agreement outlines all of the legal issues relevant to the divorce. These issues generally include division of property, child custody, child support and spousal support. A couple jointly enters into a settlement agreement, either by themselves or with the help of a mediator, shared lawyer or their own individual lawyers. Spouses often employ separate lawyers to advocate on their behalf throughout the divorce proceedings, even in uncontested matters that will not go to trial. Court mediators typically help couples with children resolve disputes over child custody and visitation schedules.

Some states allow you to file for a simplified divorce, also called a summary dissolution. Joint petitions in simplified cases are often done with short-term marriages, marriages without children and marriages with limited assets. These types of marriages can be expedited through the legal process because they have limited legal issues to be resolved during the divorce proceedings. Some state courts accept joint petitions for simplified cases based on certain criteria. For example, a court in one state may consider a joint petition for a simplified divorce when the marriage lasted less than five years while another state may limit such divorces to marriages of less than eight years. Courts often offer fast-track simplified divorces for married couples without dependent children or outstanding financial debt.

Joint Petition and Waiver of Rights

Since joint petitioners sign and submit a joint petition for dissolution of marriage together, they waive their rights to service of process, which is when the petitioning party provides his spouse with a copy of the petition. Neither party can later argue they were not aware of the divorce proceedings, especially in states that require both signatures to be notarized. If you sign a settlement agreement and the court approves it as part of the final divorce, those terms are legally binding on both you and your spouse. If you waive spousal support or property rights in the agreement, this may be irreversible, except under extreme circumstances, such as fraud.

Divorce is never easy, but we can help. Learn More
What Kinds of Divorce Are There?

Even in no-fault divorce states where dissolving a marriage is a matter of personal choice, a judge must supervise your divorce proceedings and sign off on your divorce agreement. A divorce is not granted until the court enters a final divorce decree.

How to Get a Quick Divorce in California

California offers a summary divorce option for ending your marriage quickly, but this doesn’t avoid the state’s six-month waiting period. Whether you qualify for a summary action or must use the state’s uncontested divorce procedure, the soonest you can finalize your marriage is six months from the date you file your petition.

Do All Wills Have to be Probated in Pennsylvania?

All wills must be probated in Pennsylvania. However, Pennsylvania provides a simplified process for smaller estates, with shorter proceedings and typically fewer expenses than traditional probate. In Pennsylvania, any interested party -- like a spouse or other beneficiary, creditor or the personal representative designated in the will -- may file a petition for settlement with the court if the estate meets certain requirements.

Some jurisdictions offer a simplified divorce process for couples who have no kids and no assets. Often, this process ...

During the divorce process, the court and individual spouses’ attorneys ask both parties to sign agreements, petitions ...

Illinois courts offer a joint, simplified divorce for couples with no children and limited assets. This type of divorce ...