What a Judge Looks at During a Divorce

A judge in a divorce case may have to decide major issues, such as custody and parts of the property division, if the parties can't reach an agreement. Knowing what the judge reviews during your divorce helps you prepare for the legal process and avoid making mistakes that may harm your position with the judge. 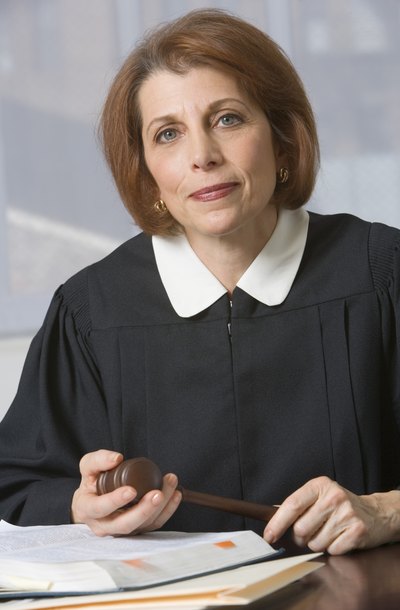 A judge examines the property of the marriage that is subject to division under state laws, as well as the debts of both spouses. Property includes real estate, financial accounts, stocks, and retirement pensions or accounts in some states. The judge must divide property and debt in a way that conforms with state division laws. Some states, such as California and Idaho, have community property laws. Other states, including New York and Ohio, have equitable division laws. A judge in a community property state divides marital assets and debt equally between both spouses; each spouse gets half the total value of the marital assets and is responsible for half of the total debt. A judge in an equitable division state must split the property and debts after weighing various factors, often including both spouse's abilities to support themselves, as specified in state laws.

A judge decides legal and physical custody of the children of the marriage after he considers several factors. He may split legal custody or give sole legal custody to one parent. Legal custody gives a parent basic parental rights, such as the authority to make major decisions for the child. Physical custody may be split or given to one parent; a child's primary home is with the physical custodian. The judge will determine who the primary caregiver was during the marriage and what will bring the most stability for the children; he also considers the wishes of the children and the parents. The past of a parent is a factor it includes allegations of abusive behavior, criminal activity or child neglect. Once custody is decided, the judge looks at the noncustodial parent's relationship with the children again and the wishes of the children and both parents to determine visitation, also called parenting time. However, if both parents are able to agree to a visitation schedule, the judge often accepts their proposal instead of setting the schedule himself.

State laws give judges guidelines on child and spousal support calculations, including percentages for final support calculation based on the noncustodial parent's total income. These guidelines cover what a judge should include when calculating the total income of each spouse for the purposes of support award determination. State guidelines give a judge discretion; he may deviate from the guidelines when awarding a spouse support because of extenuating circumstances. For example, if a child has a serious medical illness, the judge may award the primary custodial parent child support above the guideline amount due to the additional needs of the child. State guidelines also offer judges instructions on specific martial and custodial issues, such as division of a pension and the court process needed to change a custody order.

The judge has to decide some issues based on what information he has; he's not emotionally involved in the divorce and must act impartially. The behavior of either spouse may affect his decisions, particularly in custody matters. For example, if one spouse dates another person while divorcing and alienates the children as a result, the judge may consider the harm the dating spouse caused to her relationship with the children with deciding custody and visitation.

Child support obligations come into play whenever parents in Ohio become divorced. In Ohio, child support is based on providing the child with the same standard of living that existed when the parents lived together. The courts will look at both parents' income to determine what financial contribution one parent should make to the other.

Understanding what physical custody is and why it is ordered by Maryland judges can help parents decide which type of parenting arrangement to pursue. The term "physical custody" refers to day-to-day decision-making in combination with providing a living environment for the child. Physical custody can be agreed upon by parents in lieu of a sole or joint legal custody court order. Judges in Maryland consider many factors in making an initial determination of custody, and a modification may be sought in the future by either parent.

New York divorces often include custody and visitation issues if the spouses have children together. If parents can't ...

In Minnesota, the court presumes that it is in the best interest of the child to spend time with both of her parents ...

Is There a Law in Washington State About No Overtime for Child Support?

When the court determines the income a parent receives for child support purposes, it typically must consider all ...