What Kinds of Divorce Are There? 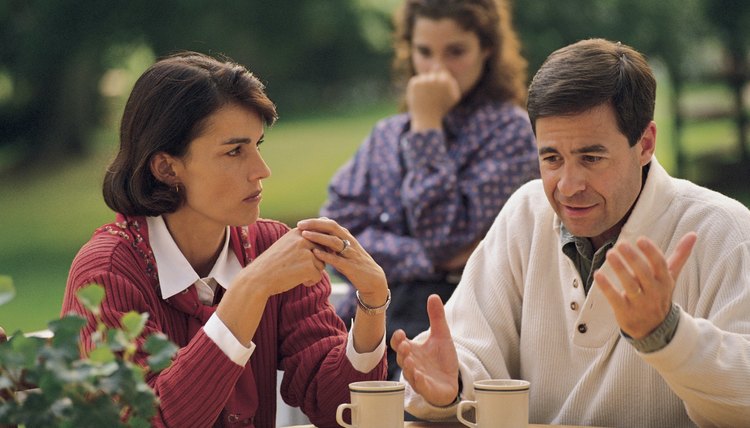 All states allow some type of no-fault divorce, where the court hears a divorce case without a determination of who is at fault for causing the divorce. Some states allow a fault-based divorce, where the court determines who is at fault for the termination of the marriage. In no-fault cases, the court refuses to hear issues of wrong-doing, such as adultery, mental cruelty or spousal abuse. However, in fault cases, a court considers these types of faults, and their negative impact on the marriage. If a spouse commits adultery and abandons his commitment to the marriage, the court can take these facts into consideration. Some states use a bifurcated divorce system, where they first resolve the dissolution of the marriage and later resolve property division and child custody issues at a separate hearing.

Many states offer some form of a simplified divorce, also know as a summary dissolution. A simplified divorce refers to less complicated divorce cases that may be expedited through the court. These fast-tack type of divorce cases, often include shorter marriages, with limited assets, minimal outstanding debt, no children and no real property. Each state determines what type of marriage qualifies for a simplified divorce. Some states consider the length of the marriage, the amount of assets and whether the couple has any dependent children.

Divorce is never easy, but we can help. Learn More
One-Sided Divorces in NYC

During the divorce process, the court and individual spouses’ attorneys ask both parties to sign agreements, petitions and affidavits. If one spouse refuses to sign the divorce papers, it is still possible for the divorce to proceed. Such refusals usually slow down the divorce process and may lead to additional hearings, trials or mediation sessions, but will not preclude the couple from ending the marriage.

Procedures for Divorce by Mutual Consent

The quickest and easiest divorce is a divorce where both parties agree to everything before ever setting foot inside a courtroom, i.e. a divorce by mutual consent. When there is nothing to fight about, the court only needs to sign off on the agreement the parties already made regarding property division, spousal and child support, and child visitation.

What Does a Joint Petition Divorce Mean?

What Would Hold Up an Uncontested Divorce?

Uncontested divorces range from simple cases without children and marital assets to complicated cases with custody ...

How to Do Your Own Divorce in Michigan

As a no-fault divorce state, Michigan grants your request for a divorce without the need to prove fault. The only ...

Divorce is a stressful process that often prompts a great deal of soul-searching by both parties. It is not uncommon ...