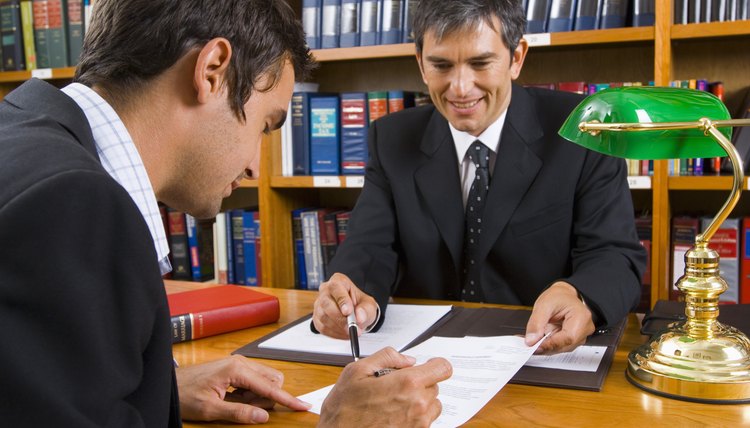 Nevada laws do not require couples to prove that one or both is at fault if they decide to divorce. NRS 125.010 lists the grounds for divorce in the state of Nevada. These include insanity, incompatibility and separation for at least one year. If one of the spouses alleges that the other is insane, he must produce corroborative evidence from a medical practitioner.

If the couple disputes either the causes or the issues arising from the divorce, either one can file a Complaint for Divorce at Clark County Court. After filing, the County Court assigns a judge and case number to the case. A copy of the complaint should also be served on the spouse. After service, the spouse has a period of 20 days to file a formal answer with the clerk. If the couple has minor children, they must attend the Court Family Mediation Center to develop a parenting plan for the benefit of the children.

Where the couple agrees on all relevant issues, they can apply for a Joint Petition for Divorce. Each spouse signs a document to signify his or her agreement on the division of property and, if relevant, child custody and access issues. Once the court has reviewed the documentation and established that the couple understand and agree to the terms, it will grant the divorce.

NRS 125.150 states that a court may, when granting a divorce, award alimony to either spouse either in a principal sum or as periodic payments. In awarding alimony, the court considers a number of factors, including the financial position of each spouse, the duration of the marriage, the earning capacity of each spouse and the contribution of either spouse as homemaker. The court may grant a specific sum for the purpose of obtaining training or qualifications needed to obtain a position of employment.

Spouses often agree to divide community property between themselves during the divorce proceedings. If they cannot agree, Nevada law provides that marital property shall be divided equally between the parties, unless the court finds a compelling reason to divide the property unequally. If the court decides to make an unequal distribution of community property, it must set out in writing its reasons for doing so.

Divorce is never easy, but we can help. Learn More
Divorce Laws in California

Annulling a marriage is a legal process that dissolves a marriage and results in a declaration that the marriage never existed. This differs from a divorce, because a divorce simply terminates a marriage, whereas annulment invalidates it. Family law is a topic governed by state law and Arkansas has established requirements for couples to get married, as well as processes and requirements to end those marriages.

How Is a Separation Date Determined in a Florida Divorce?

In California, a court-approved annulment invalidates a marriage as if the two spouses had not married each other. Some ...

Rules for Divorce Without Children in Colorado

Even without children, a divorcing couple has a lot to consider when pursuing a divorce in Colorado. The court will not ...

Valuating and dividing up your assets can further complicate the already contentious matter of divorce. Wisconsin law ...