How Long Can You Take to File Response Papers in a Divorce Case in California?

Responding to the receipt of divorce papers is just as important as filing paperwork initiating the divorce. California law provides that in your response in a divorce case, you may address the facts alleged in the initial filing; you may also mention facts not addressed in the initial filing, and you may even make a claim that the court does not have the power to decide the matter. A spouse served with divorce papers ordinarily has 30 days in which to respond in California. 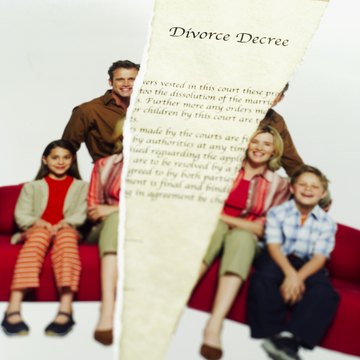 Responding with a Response

Responding with a Motion to Quash

When you respond, you may instead decide to respond with a “motion to quash” rather than with a response. A motion to quash states your belief that the court does not have personal jurisdiction over you, or that the petitioning party did not follow the legal requirements of serving the respondent with the divorce papers. Personal jurisdiction refers to the power of a court to make a decision that affects you. For example, if a divorce petition filed in California requests the court to order you to pay child support, and if you do not live in California and have no significant relationship with California, a California court would probably lack jurisdiction over you and would not be able to make an enforceable order that awards child support. Although a response is made on fill-in-the-blank forms available throughout the state, there is no standardized motion to quash form. If you wish to file a motion to quash, you might be best served by consulting an attorney or using a third-party legal document service.

Divorce is never easy, but we can help. Learn More
What if My Wife Defaults in a Divorce in California?

Can You Just Not Do Anything in a Divorce if You Are the Respondent?

Your spouse is required to serve you with divorce papers after she files for divorce, including her divorce petition, or complaint, and a summons. Generally, the summons lists deadlines for you to respond to the petition or provides scheduling information for your initial appearance in court. If you choose to ignore the summons, the court still may enter a judgment against you.

Each state has unique laws regarding divorce and family law matters, so the actual process of preparing and filing divorce documents is determined by state civil procedure laws and local court rules. The term "divorce documents" may include the petition or complaint for divorce, motions for support and custody, stipulated property divisions, and final settlements and decrees. In general, divorce documents are commonly referred to as “pleadings” or “court filings."

Can Only One Party File in a No-Fault Divorce?

If spouses always had to file for divorce together, it would most likely drop the divorce rate to something close to ...

Grace Period for a Default Divorce in Missouri

Courts want to give both spouses an opportunity to provide their sides of the story during divorce proceedings, but if ...

What Happens in Minnesota If a Divorce Becomes Defaulted?

In Minnesota, a divorce defaults when one spouse refuses or neglects to become legally involved in the process. If he ...

What Is a Default Divorce in Tennessee?

If your spouse fails completely to respond to the divorce proceedings, Tennessee courts may award you a divorce by ...