How Long Can a Sample Be Before You Need Copyright Permission?

It is a myth that you can sample a particular length of work, such as four bars or seven seconds of a song, without getting into trouble with copyright protection laws. The law is a bit more complicated. It is best to ask permission from the copyright holder before sampling a piece of music or other copyrighted materials, such as literature, film or artwork. If your use of another's work falls under the category of "fair use," you may be able to use it without permission, but if you're wrong about how much of the original work you're allowed to sample, you could face serious fines in court. 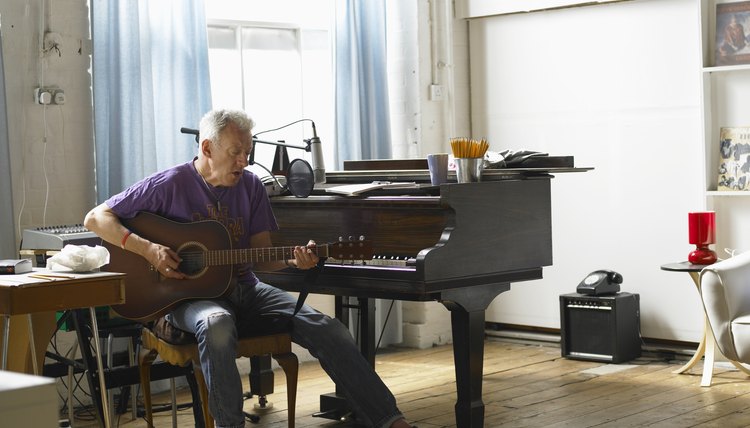 Without permission, generally you can only use a sample of another artist's creation if it falls under the "fair use" doctrine. The law does not provide that you may use a specified amount of material, such as a number of paragraphs of text or seconds of music, before you are in violation of copyright law, meaning the copyright holder could sue you for using even a small amount of material. Instead, courts will consider a number of factors, including the purpose of the use, the nature of the work being sampled, how much of the original was used, and the impact on the original work. Use that is noncommercial but instead for nonprofit educational purposes is more likely to be considered fair use. Courts also will consider if the copyright holder is impacted by your use of the sample, such as if the public is less likely to purchase the original album of music because they can access the music through your new composition. Even if your use of another's work falls under the definition of "fair use," you are generally only allowed to use a portion of the work as necessary, such as limiting your quotes from a book as needed for your scholarly paper.

The U.S. Copyright Office recommends that if you are at all in doubt as to whether your use of copyrighted material is fair use, you should ask permission from the copyright owner to use the material. Again, without permission, you are limited to using only the amount of material that is necessary; you cannot replicate someone else's work substantially without permission. It is not always the creator of the work who owns the copyright -- often music is owned by a publishing company, for example. In addition, if you want to use an actual recording of the song instead of re-recording your own version, you must obtain permission from the copyright holder of the song recording as well, which is often a recording studio or label.

Protect against infringement by registering a copyright. Get Started Now

Paying for a License

If copyright holders allow you to use their work that doesn't fall under the fair use exception, which they are not required to do, they may charge a fee for the license, which allows you to use the sample. The cost for a license is not mandated by the law and can vary significantly based on the artist and your use of the material, such as the length of the sample you want to use. You may be charged a flat fee to use the sample, or you may pay based on how many productions, such as records, you create or sell. You may seek the help of an attorney to track down the copyright holder and negotiate a license agreement.

If you sample something without permission, it is possible that the copyright holder will bring a lawsuit against you. Courts have not provided specific rules as to when sampling is considered infringement, although samples used in parody, education or research are more likely to be considered fair use. If the copyright holder is successful in his lawsuit against you, you could be ordered to pay any damages that resulted from your unlawful use of the sample, as well as statutory damages up to $150,000, attorney's fees and court fees.

Protect against infringement by registering a copyright. Get Started Now
The Right to Sell Copyrighted Material

Can I Record Someone Else's Song and Change the Words in Parody Law?

United States copyright law grants legal protection to various creative works, including songs or lyrics. Under The Copyright Act of 1976, copyright holders have exclusive rights to reproduce their creations for a specific length of time. Those exclusive rights are limited by the doctrine of “fair use,” which allows for others to reproduce a work in whole or in part for use in a parody without the copyright holder’s permission, provided the parody meets certain criteria.

A copyright protects original works in tangible form, such as manuscripts, music recordings or computer code, from being used without the owner's permission. Generally, if you want to use all or just a part of a copyrighted work, you must obtain permission from the copyright holder. Failure to do so is copyright infringement, which carries civil and criminal penalties. There is, however, a limited exception known as fair use.

Copyright law protects all aspects of an artistic work, as long as the work is original and has been reduced to a tangible medium. Song lyrics, for example, are protected as soon as they are recorded, whether in audio or written form. Although you don’t need to register your song lyrics with the U.S. Copyright Office to enjoy copyright protection, registration makes it easier to prove that you wrote the lyrics before the infringer did and allows you to collect damages without proving economic harm.

Examples of Fair Use Copyright Laws in the Classroom

What Are the Copyright Laws for Images?

Digital cameras and social networking sites have led to an increase in the volume of images across the media. Anyone ...

How to License a Jingle

Licensing a jingle is not much different from licensing any other copyrighted song. Before you can proceed, you will ...

Legal Use of the Disney Characters

Walt Disney and the Disney group of companies have created some of the most memorable fictional characters in ...