How Long Does the Divorce Process Take After the Deposition in Virginia?

Your depositions -- formal statements, either oral or written, that carry the same importance as testimony in court -- play a different role in a Virginia divorce, depending on whether the divorce is contested or not. In contested divorces, spouses do not agree about the terms of the divorce, and in uncontested divorces they do. However, every divorce is different, and the length of time required for your divorce will vary based on the court’s workload. 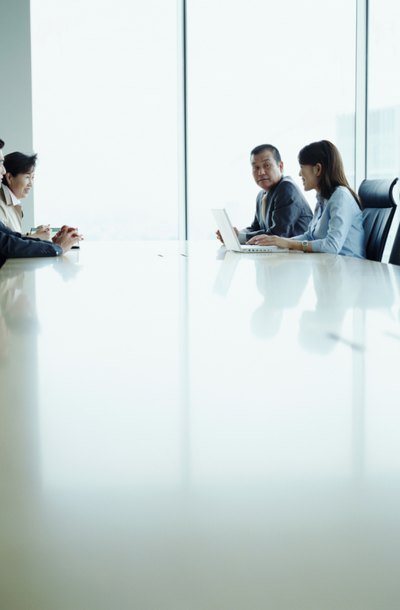 In a contested divorce, the spouses cannot reach agreement on some terms of the divorce, so they rely on the court to decide those terms. For example, if you and your spouse cannot agree about how to split your property, the court will decide for you based on evidence you each submit. Since you cannot properly prepare your case without getting information from your spouse and his witnesses, Virginia rules provide a discovery period early in the divorce process. During discovery, you and your spouse exchange information, sometimes in the form of depositions. At an oral deposition, the witness is placed under oath and questioned while a stenographer or reporter records the conversation. Later, the stenographer transcribes the deposition and it may be accepted by the court as evidence. Written depositions typically include an exchange of written questions and answers, but they have the same legal effect as oral depositions.

The discovery phase normally does not begin until after the court considers any temporary orders requested in your case. For example, if you request a temporary child support order, the court hears and decides that request before discovery begins. This may be a few months into the divorce process. When discovery is complete, you or your spouse, or your attorneys, can request a court date for the trial on your disputed issues. Depending on how busy the court is, your trial date could be six to eight months after your discovery phase is complete. Even after your trial is complete, your divorce may not be final immediately, since the judge may need time to review testimony and evidence before issuing a written decision and decree.

Divorce is typically quicker when you and your spouse can reach agreement on the terms of divorce. Since July 1, 2012, Virginia spouses have the option to finalize an uncontested divorce with a deposition instead of appearing in court. Though some courts allowed divorce by deposition before, the 2012 law standardized the process across Virginia. This type of deposition recaps the facts of your case in written form. You must submit your deposition along with a deposition of a third-party witness to the court instead of appearing before a judge for a final hearing. A law clerk then reviews the depositions and forwards your case to a judge for approval.

After your uncontested divorce case is submitted to a judge, he reviews the entire case to determine whether Virginia’s legal requirements have been met. Frequently, this review process takes two or three weeks. Once the judge is satisfied that you meet Virginia’s standards, he issues a divorce decree and will likely incorporate into this decree the written agreements you and your spouse made. Whether you file a contested or uncontested case, your divorce is not final until the judge issues the decree.

Divorce is never easy, but we can help. Learn More
What Happens at a Mandatory Divorce Settlement Conference in California?

Amount of Time Between a Magistrate's Recommendation and Divorce

Not all states use magistrates to assist in the divorce process. Among those states that do, magistrates are often limited to deciding child support or post-divorce issues. Florida and Colorado restrict the roles of magistrates. However, in Maine, they can decide divorces in some jurisdictions, if both spouses consent. Courts that employ magistrates generally do so because their dockets are crowded with more family law cases than the district’s judges can handle on their own.

Getting a marriage dissolved is not something that can be accomplished overnight. Even if you and your spouse are in agreement regarding every aspect of the divorce, there may be a long line of people ahead of you waiting to get into court. In some states, a judge has the option of referring part of a divorce case to a magistrate. Magistrates can make recommendations to the judge and help move a case forward at times when the docket is overly crowded.

Can You File for Divorce in Virginia if Your Spouse Refuses?

While divorce is typically an emotionally difficult process, the complexity and frustration of a divorce case is compounded when your spouse is uncooperative. Your spouse's refusal to agree to an uncontested divorce can exacerbate the legal process into a lengthy and costly adversarial case. However, Virginia law allows for a divorce even though your spouse refuses to consent.

How Long Does it Take for a Divorce in Kansas

Divorce cases can vary from quick and smooth when spouses agree to long and difficult when they don’t. A Kansas divorce ...

Finding common ground in a divorce action is not always easy. For divorcing couples in Virginia who cannot agree, the ...

How to Appeal a Divorce Judgment in Oregon

The greatest downside to a hard-fought divorce battle is that you end up trusting the most precious aspects of your ...

The divorce process in South Carolina can range anywhere from six to 18 months, from start to finish. No two cases are ...