How Long Does a Marital Separation Agreement Last?

A marital separation agreement is used when a married couple decides to separate; it may or may not be followed by a divorce proceeding. A separation agreement can govern such matters as divison of property, child visitation, and both spousal and child support. In states which require that the parties live apart for a period of time before divorce will be granted, a marital separation agreement can be a preliminary step. How long your agreement will last is a matter which can be spelled out in the document; however, certain matters, such as child support, are necessarily limited in duration while others, such as division of property, are permanent. 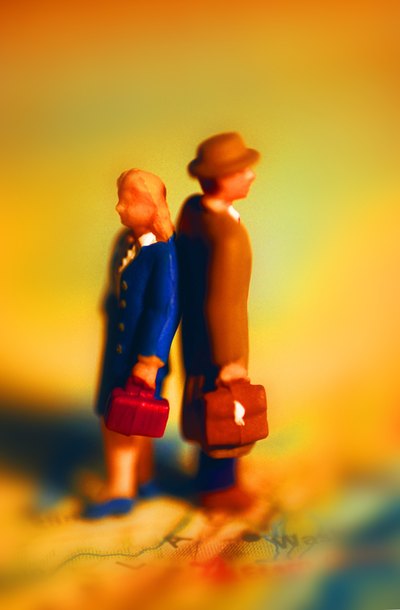 The law governing division of property varies from state to state. For example, some states, such as Louisiana, Texas and California, employ the "community property" model, where it is presumed that all possessions acquired during the marriage are jointly owned, with the primary exception being those things one spouse bought as a gift for the other spouse. Others, such as Georgia and Tennessee, use the equitable division model, where an attempt is made to divide the property acquired during the marriage according to what is deemed fair. The question of how the courts in your jurisdiction might award a given asset is important because your determination of whether to give or take should be guided by your knowledge of what would happen if the matter were before a trial judge. In any event, it will be important that you consider all of your property and make a decision as to how it will be allocated between you and your spouse. You must also address your marital debt and the tax consequences of your final determination. Matters such as these may require that you consult with an attorney for legal advice before making a decision. Division of property is, in most cases, permanent.

If you have minor children, you will also need to consider the question of child support. Often, one spouse will be the primary custodian while the other spouse will have weekend and holiday visitation. Most separation agreements address how much time your child will spend with each parent, with the focus being on the best interests of the child. Quality parenting time must be balanced against the child's need to attend school. The primary custodian typically receives support payments from the other spouse. Most states have charts or formulas which you can use to determine the amount of child support required. Child support lasts, in most cases, only until the child reaches 18, although some states require educational support for minor children who attend college.

Spousal support is more complex, as the type of available support varies from state to state; moreover, determining the amount of spousal support tends to be quite case specific. For example, Florida permits a court to award rehabilitative, temporary, or permanent alimony as part of a dissolution proceeding. The duration of spousal support depends upon the type involved. Rehabilitative support is designed to allow you to obtain additional training so that you can return to the work force; it, like temporary alimony, is limited in duration. Permanent spousal support may well be permanent but can terminate, in some states, when the recipient remarries.

An understanding of the factors involved in a determination of the type and amount of alimony that can be awarded creates more realistic expectations heading into court. In Florida, lifetime alimony, also known as permanent alimony, can be deemed appropriate in certain situations. While the parties can reach a mutual agreement on the issue of alimony, the court will look to specific factors, including financial need and ability to pay, in ordering lifetime alimony payment amounts. Further, modification or termination may be requested if there is a substantial change of circumstances.

Can a Non-Modifiable Alimony Agreement Be Modified in Ohio?

Most alimony awards in Ohio are non-modifiable unless they contain language that reserves the court's jurisdiction to do so. This is true whether you terminate your marriage by dissolution or divorce. Dissolution simply means you and your spouse have reached an agreement on marital terms, such as alimony, while divorce means the court resolved one or more of these issues for you. Unless the terms of your agreement or decree give the court authority to later modify alimony, it is likely that your alimony order will remain intact unless you can prove fraud, misrepresentation or mistake.

What Is Family Support Vs. Spousal Support?

Family support, spousal support and child support are all intended to provide financial assistance to a former spouse ...

How to Calculate Spousal Support

The questions of whether and how much spousal support to award are not determined easily. Courts are typically required ...

Sharing property is an important component of many marriages, but when couples divorce, questions often arise as to how ...

Maryland offers two types of divorce: limited and absolute. When a couple wishes to separate and is not ready to ...