An S corporation, or S corp, and a limited liability company, or LLC, are two business entities offering liability protection that people often consider when forming a business in Massachusetts. Both of these business structures restrict the owner's liability to the amount of his investment in the company. There are several differences between the two entities, including how they are formed, how they are taxed and how they must be managed. 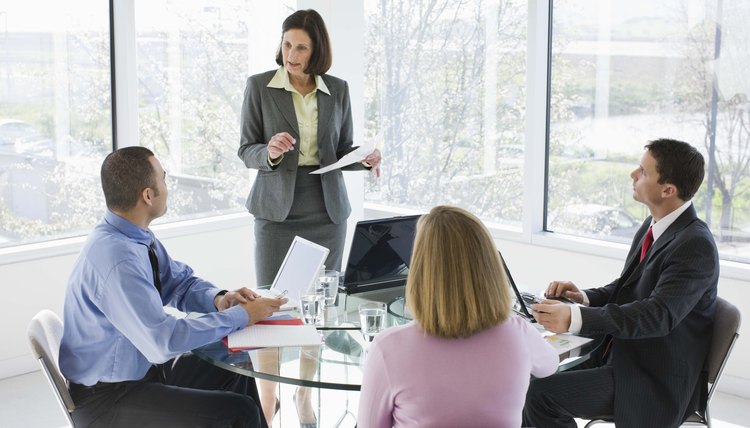 In general, the S corp is a more rigid structure than the LLC. For example, the S corp is required to elect at least one officer and one director, create bylaws, hold board meetings and record minutes for those meetings. An S corp is also limited to 100 shareholders. On the other hand, an LLC is managed by members, who are owners of the corporation, similar to partners in a partnership. An LLC can have anywhere from one manager to an infinite number of managers.

An LLC is generally treated as a partnership for tax purposes, but may be treated as a corporation if the LLC exhibits certain characteristics. If an LLC is treated as a corporation, profits will be taxed at the corporate level and again at the member level. If the LLC is treated as a partnership, it will be subject to pass-through taxation, as is the case with an S corp. This means that the entity itself is not taxed and the tax burden is passed on to the shareholders or members. In other words, the entity distributes its profit earnings to the shareholders or members as income and each shareholder or member pays taxes on their individual share. Note that in Massachusetts, an S corp must pay an annual minimum excise tax. Additionally, as of 2012, if the S corp's annual receipts are $6,000,000.00 or more, the S corp may become liable for state income taxes.

Another tax distinction between an S corp and an LLC concerns self-employment taxes. The IRS considers you to be self-employed if you are a member of an LLC. This means that participating members of an LLC are subject to self-employment taxes, which includes Social Security and Medicare taxes. On the other hand, shareholders in an S corp are paid a salary, with their wages reported on a W-2 with Social Security and Medicare taxes already withheld.

In an LLC, income and losses are generally allocated to members based on their percent of capital contributed or ownership percentage. However, this can be modified in the operating agreement. On the other hand, the profits and losses of an S corp are always allocated to shareholders based on the amount of shares owned.

As noted earlier, S corps generally have more restrictions than LLCs. An S corp must be a domestic corporation, have no more than 100 shareholders, and have no more than one class of stock. Moreover, certain corporations are prohibited from being S corps, including insurance companies and domestic international sales corporations. One restriction to keep in mind regarding an LLC is that when a member dies or undergoes bankruptcy, the LLC is automatically dissolved, unless an operating agreement provides otherwise; thus, the life of an LLC is limited.

Ready to start your LLC? Start an LLC Online Now
LLC Vs. S Corporation in Kentucky

An LLC, or limited liability company, is a flexible form of business entity that provides its owners with the safeguard of limited liability. An LLC can have any number of owners, known as members, so the entity is suitable for both sole proprietors and larger businesses. Although each state has its own laws for LLCs that are registered within its jurisdiction, the general rules regarding formation, limited liability, taxation and operation of the LLC are broadly similar.

Comparison of LLC to S Corporations in Maryland

Forming a separate legal entity for your business should accomplish at least two goals: shield your personal property from business debts and reduce your tax liabilities to the lowest lawful amount. For many small businesses, the legal entity of choice is usually a limited liability company or S corporation. Maryland, as all other states, allows business owners to form either of these legal entities. Comparing an LLC and S corporation with the needs of your business is essential to determining which legal entity is right for you.

A limited liability company, or LLC, and S corporation are both popular business structures that usually protect their owners from liability in their personal capacities. An LLC's owners are referred to as "members," while an S corporation's owners are referred to as "shareholders." Whether you're picking the appropriate entity for a business or trying to divide the profits of an existing business, you'll need to carefully consider the profit sharing rules that govern both forms of ownership.

The Pros & Cons of an LLC Vs. an S Corp in Virginia

Starting your own business requires making a number of important decisions, one of which is deciding what type of legal ...

A limited liability company is a company, typically with a small number of owners, known as members, that enjoys the ...

What Is the Difference Between a Series LLC & a Restricted LLC?

The relative newness of the limited liability company business structure has allowed some states to create innovative ...

Can I Have a Partner With an LLC?

A Limited Liability Company is a common business entity that may be owned and managed by one or more individuals. LLCs, ...