What Is the Meaning of Lis Pendens in a Divorce?

Lis pendens are notices that warn the public of lawsuits that affect real estate. They are used in divorce cases to prevent one spouse from transferring real estate without the other spouse's knowledge, and they serve to protect the spouses until the spouses reach a settlement or a judge decides how to fairly divide the real estate between them. 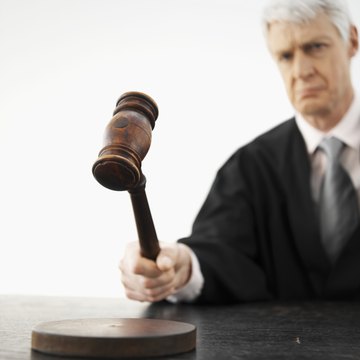 There must be a notice of lis pendens, and it must name the parties in a lawsuit, the court in which the lawsuit is pending, the name of the judge overseeing the case, and the assigned docket number to the proceedings. Typically, it also must provide the address, legal description and tax identification number for the real estate affected in the suit. A lis pendens is recorded in the register of deeds in the county in which the real estate is located. A separate lis pendens must be recorded for each piece of individual property involved in the divorce.

Failing to record a lis pendens during a divorce may lead to property loss. A purchaser may innocently buy real estate involved in a divorce unless a recorded lis pendens warns him not to. An innocent purchaser does need to give the property back, even if a judge later awards it to you in the divorce. A recorded lis pendens may also help protect your property interests if your spouse files bankruptcy. It gives you a recorded interest and a higher priority over your spouse's unsecured creditors in bankruptcy court.

Generally, a final judgment for divorce discharges a lis pendens. You may also discharge a lis pendens by recording a Discharge of Lis Pendens at the register of deeds where it is filed. Judgments and discharges should identify the real estate involved by common addresses and legal descriptions. Final judgments are specifically entered to close out lawsuits. A discharge should also state the lawsuit referenced in a lis pendens is closed and the lis pendens is permanently terminated.

Divorce is never easy, but we can help. Learn More
Quitclaim Deed & Divorce in Massachusetts

Michigan couples, like couples around the country, must split their marital property when they divorce, including the marital home. Since a house can't be divided down the middle, couples sometimes decide to split the value of the home; one spouse keeps the home and the mortgage, while the other gets her share of the equity in the form of a buyout. The spouse who gets the buyout signs a quit claim deed to give the other spouse full title to the home.

Can You Sell a Property Before the Divorce?

Dividing property owned by you and your spouse during marriage is an important part of divorce. To ensure a correct division of marital property, judges require that all marital assets be properly disclosed and valued. Knowing how your state's laws affect your ability to sell property before a divorce is granted will help avoid complications when it comes time to divide assets.

Can a Divorce Decree Be Used in Lieu of a Quit Claim in Ohio?

When a judge issues a divorce decree, he usually specifies how personal property and real estate should be divided ...

Can You Sell a House Before You Finalize a Divorce?

The marital home is often one of the most valuable assets to divide in divorce. When a couple no longer lives under the ...

Is a Quitclaim Deed on a House Binding in a Divorce?

Often, a divorcing couple's biggest asset is the home they own together, and this home must be split with their other ...

Are Divorce Records a Matter of Public Record?

The divorce process can be highly invasive. Yet the disclosure of intimate personal details can be necessary to ...