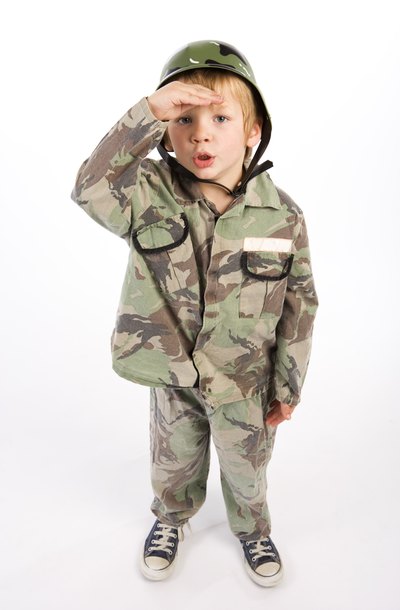 Military rules require military members to provide support for their dependents before a divorce is finalized, but military parents do not have to go to a civilian court to establish support orders prior to divorce. Each branch of the military establishes its own pre-divorce support rules to set the required support amount without going to court. For example, Army regulations set the required support amount based on the military housing allowance rates for the military parent's pay grade. The Air Force requires its members to provide adequate support for their dependents, but does not establish a set rate for the support, leaving rate determinations to the military member's commander.

The civilian court that issues the divorce decree sets the child support amount based on the state's child support guidelines. Some states' guidelines take a set percentage of the noncustodial parent's income; however, the majority of states factor in the incomes of both parents and consider the family's pre-divorce standard of living, attempting to continue this standard for the children. Generally, even when one or both parents are in the military, the laws of the state in which the couple divorces is the law that controls the child support amount. However, parents may be legally able to divorce in more than one state because state laws also vary when it comes to jurisdiction over military members. For example, a military member can obtain a divorce in the state of his legal residence and also in the state where he is stationed. But those courts may not be able to determine child custody and support matters if the children do not live in the state where the parent files for divorce.

Child support awards are set, at least in part, on the parents' incomes, but each state sets its own rules for military allowances and other categories of pay. For example, military members not living in government-provided housing receive a housing allowance, also called basic allowance for housing, or BAH. States can include a parent's BAH amount as part of the parent's gross income for child support calculation purposes. Similarly, the court can include military subsistence allowances and special skills pay income when it calculates the noncustodial parent's child support obligations.

Divorce is never easy, but we can help. Learn More
Disability in a Military Divorce

Can VA Disability Compensation Be Used to Calculate Child Support or Income?

In New Mexico, the amount of child support is determined based on the principle that a child should receive the same level of support he received while his parents were married or still living together. This requires both parents to contribute to the total obligation in proportion to their incomes, based on a formula established by state law. Once ordered, the child support obligation lasts until the child reaches the age of majority.

Can a Custodial Parent Collect a Portion of VA Disability & Child Support?

When a child lives primarily with one parent after divorce, child support orders help ensure that both parents contribute a fair share financially to support the child. To determine a support amount, states can factor in the income of one or both parents. If you were awarded custody of your child in the divorce and expect to receive veteran's disability benefits, the amount you draw from the government could affect the amount of child support that the court will order the other parent to pay.

Military couples cannot get divorced by military courts, so they must get their divorces in state courts. Since divorce ...

When two parents have children together but don't share a household, one parent often needs to provide financial ...