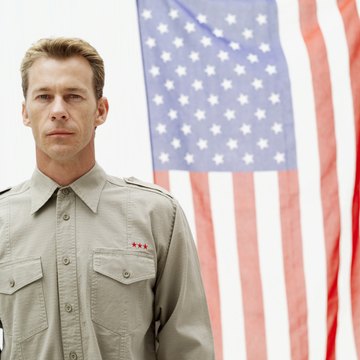 Although military retirement pay originates from the federal government, the law considers it a marital asset. Therefore, it falls to state courts to apportion it in a divorce. To do this, the state must have jurisdiction over both spouses. The spouse who files the divorce complaint must attest in the complaint that she’s met her state’s residency requirements; this gives the state jurisdiction over her. The court achieves jurisdiction over the other spouse through process of service, when he’s officially given a copy of the divorce complaint. If he is serving in the military and is deployed overseas, he must generally consent to service. If he's retired, however, he would be served as a civilian. After service is completed and jurisdiction is accomplished, the laws of the state where the complaint was filed apply to all property distribution, including military retirement pay.

When a state court divides a service member’s retirement pay in a divorce, some states require him to begin writing a check to his spouse each month for her share before he has retired. In these states, the non-military spouse’s benefits kick in when the service member is eligible to retire, not when he actually does. He may end up making payments before he begins receiving retirement pay.

If a service member is already retired when he divorces, and if he is already receiving his retirement pay, state courts have the right to treat this as regular income for child support and alimony purposes. Child support may be payable through garnishment of retirement benefits, especially if the noncustodial parent falls behind in making payments.

Although the federal government doesn’t dictate how the court should apportion retirement pay, it might become involved with how the nonmilitary spouse receives that pay. With long-term marriages of 10 years or more, if the military spouse served during 10 of those years, the federal Defense Finance and Accounting Service will write the nonmilitary spouse a check each month for her portion of the service member’s retirement pay, if she requests it. Otherwise, the service member must take care of the payments himself.

A nonmilitary spouse may have the right to continue as beneficiary of a service member’s survivor benefit plan annuity after he’s retired. Normally, divorce would eliminate her as beneficiary if the service member named her as such before the final divorce decree. But if spouses agree in a divorce settlement that she should remain as beneficiary, or if a judge orders it, she can continue by changing her status from “spouse” to “former spouse.” The federal government will honor this.

Divorce is never easy, but we can help. Learn More
Military Divorce Benefits When Married Less Than 10 Years

When a divorce involves military members, a combination of both state and federal laws apply, which can complicate matters. However, state courts, not military courts, actually grant the divorce. Military members and their spouses can divorce under Washington’s laws like other Washington couples, but some aspects of the divorce are slightly different due to a spouse’s military status.

Virginia divorce law allows a person to share in her former spouse's retirement plans in some cases. Virginia is an "equitable distribution" state, so a judge in a divorce case divides property between the couple based on what he believes is fair. A judge may include retirement funds as part of the distribution if doing so gives each spouse a fair share.

If a servicemember becomes disabled due to an injury related to his service, he may receive payments from the Department of Veterans Affairs that add to his military compensation, sometimes reducing his retirement pay in the process. These disability payments are treated differently than retirement payments -- and state divorce courts have limited authority to give a portion of the disability funds to the military member’s ex-spouse.

Your divorce decree will divide many different types of property – real estate, personal property and money. If your ...

Child support guidelines vary among states -- and these laws apply to members of the military, who must divorce in ...