Some jurisdictions offer a simplified divorce process for couples who have no kids and no assets. Often, this process will allow the couple to use simplified paperwork and shorten the divorce process. This simplified process is not available in every state, however. In some places, filing for divorce without children and assets may be similar to the process that couples with kids and property undergo. 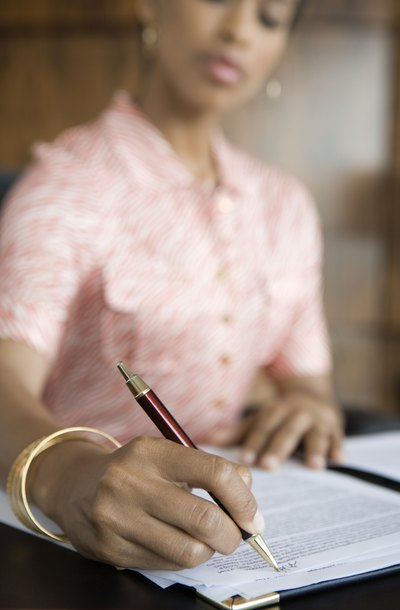 In states that offer simplified divorce for persons without kids and assets, the couple can generally file a joint petition with the court. In other words, both parties will collaboratively prepare and sign the petition, assenting to the dissolution of marriage. Generally, this is only for marriages of short-term duration, and the couple might have to waive alimony claims and rights to a trial.This petition will generally stipulate that they do not have significant assets or debts, and explicitly state that no children were born or adopted during the marriage. Further, a simplified divorce petition will list basic information about the couple -- including their names, dates of birth, date of marriage and grounds under which they are seeking divorce.

Although divorce laws vary from state to state, couples filing for divorce who do not have assets or children may be required to submit additional paperwork with their petition. This extra paperwork may include financial declarations that discuss the couple’s income and debts. Likewise, state law may require the couple to provide waivers of service, which attest the couple prepared the petition jointly.

In many instances, the court will require a couple to submit a separate settlement agreement, along with their simplified divorce petition. In states that do not require couples to file a settlement agreement at the time they file the petition, the court will generally require the parties to prepare one before finalizing the divorce. This settlement agreement will simply outline the terms of the divorce, and the agreement typically needs to include statements about division of the couple’s joint marital property -- even if the property is not of significant value, as well as statements about how the couple will dispose of any joint debts.

When Simplified Divorce Does Not Apply

Divorce is never easy, but we can help. Learn More
What Does a Joint Petition Divorce Mean?

How to File for Divorce for Free in Florida

The state of Florida requires that divorces begin with a Petition for Dissolution of Marriage. This sets the legal process of divorce in motion; eventually, the courts will hear the case and a judge will sign a final decree, at which point the divorce is complete and legal. Although the process can be expensive, state law provides for filing free of charge for those who qualify.

Can a Divorce Be Final in Two Months?

Once a couple decides to divorce, they often want to move through the process as quickly as possible. Whether or not you can finalize a divorce within two months is largely dependent on the laws of your state and also on your ability to come to a settlement agreement with your spouse. In addition to the waiting period that some states impose on all divorcing couples, you must also ensure that you or your spouse meets the residency requirements of your state to obtain a divorce.

How to File for Divorce With No Money

If you would like a divorce but have very limited financial means, you may be able to file the necessary papers without paying the court fees. Most civil courts have provisions that allow the indigent to carry out some basic legal procedures. Every jurisdiction has its own guidelines for waiving fees. Carefully follow the instructions provided by your local court clerk for this process.

In most states, a legal separation means a couple is bound by a court order outlining the terms of their separation. ...

When spouses own no property together and custody of children is not an issue, divorce can be a relatively quick, ...

Guide to Uncontested Divorce in Minnesota