Your divorce decree will divide many different types of property – real estate, personal property and money. If your ex-spouse is in the military or retired from the military, the court has the option to give you a share of his military pension. While you don’t automatically get a certain share of the pension, North Carolina courts must distribute a military pension in the same way they distribute other types of property. 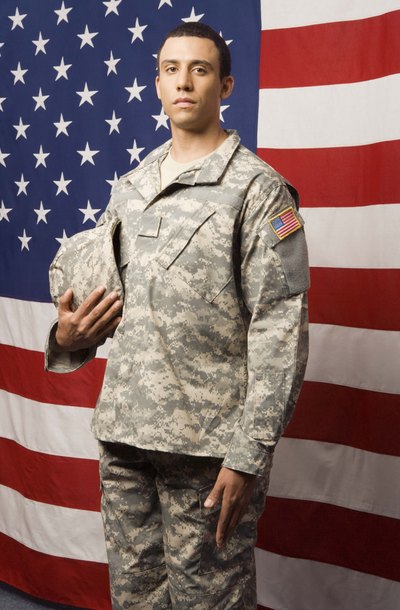 The Uniformed Services Former Spouses Protection Act, a federal law that was passed in 1982, gives states the authority to divide military disposable retired pay in the same way the courts may divide other marital property, up to a maximum of 50 percent unless there are alimony or child support orders against the service member. Disposable retired pay is the retired service member's total monthly pay minus Survivor Benefit Plan premiums, medical and disability benefits, Combat-Related Special Compensation, money owed to the government, fines and forfeitures. USFSPA also gives rights in certain military benefits, such as health care, to some ex-spouses of service members.

North Carolina divides marital property equitably between spouses as directed by the North Carolina General Statutes, Sections 50-20 and 50-21. North Carolina specifically includes military pensions as marital property to be divided by the court during divorce. Typically, courts distribute marital property equally except in cases where an equal distribution would be unfair to one party. The court can divide the pension by stating in the divorce decree that a certain portion must be paid to you once your ex-spouse retires and begins receiving his pension. If your ex-spouse is already retired, you would begin receiving payments as soon as your divorce is final. In the alternative, the court can determine a present fair market value of the military pension and use that value as a set-off against other property you will receive. In this way, you receive more of the non-pension property but no rights to the pension.

Your share of the pension can be paid directly to you by your ex-spouse, but it can be logistically difficult to collect the money if your ex-spouse does not cooperate. USFSPA allows some ex-spouses to receive direct payments of their portion of the military pension from Defense Finance and Accounting Service, as long as there is a court order requiring payment and not just a separation agreement. For direct payment, the marriage must have lasted for at least 10 years. Some states allow payments to be made while a service member is still on active duty, but North Carolina does not allow this.

Divorce is never easy, but we can help. Learn More
Spouse's Rights to Military Benefits

As a result of the passage of the Uniformed Services Former Spouses’ Protection Act, or USFSPA, by Congress in 1982, former spouses of military personnel are eligible to receive a portion of a spouse’s military retirement benefits during divorce proceedings and are also eligible for continuing medical and dental coverage. The law accomplishes this by permitting state courts to treat the pension as marital property.

Can an Ex-Wife Get Retirement Pay From the Husband if He Retired After the Divorce?

Courts divide marital property -- including retirement benefits -- when a couple divorces. Even if a spouse has not yet retired, the divorce court can divide both the assets in his retirement account and pension benefits he owns at the time of the divorce. However, courts do not typically reopen a divorce case once one spouse retires to give a portion of his retirement to the other spouse.

How to Split the Pension in a Divorce

Unlike other retirement accounts, dividing a pension is often difficult because it’s hard to place a value on what the pension might be worth in the future, and some pensions are not guaranteed until the employee spouse has worked for the company for a certain number of years. For example, in most circumstances, a military service member does not receive his retirement benefits until he has served for at least 20 years.

Retirement accounts and pension benefits can be some of the most valuable marital assets when a couple divorces, and ...

Losing access to military benefits can be one of the most difficult financial hits a non-military spouse faces in ...