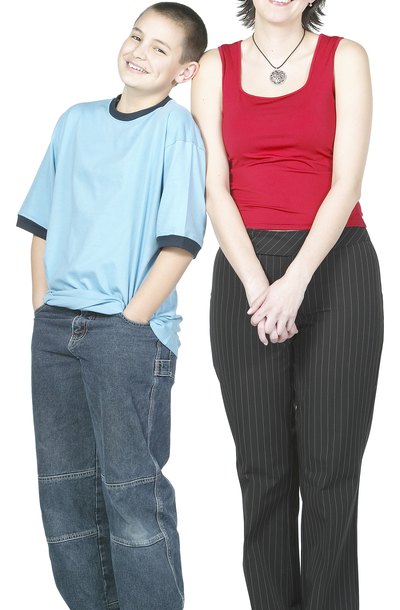 The state of Ohio offers public assistance to needy families. This can include food stamps, health coverage, cash assistance and heating allowances. If either parent is receiving these benefits, the funds are not considered "income" for the purposes of calculating child support. Instead, the state combines the wages that both parents are making or have the ability to make -- and takes that number and compares to a state-provided chart that lists total joint adjusted incomes and child support amounts for each. The parent ordered to pay support, typically the non-custodial parent, is required to pay a percentage of the guideline amount in the same proportion that his income is to the combined income.

In cases where the non-custodial parent fails to pay pursuant to a child support order, the custodial parent continues to receive public assistance while the CSEA tries to collect. CSEA has both administrative and judicial options. The agency can start wage withholding through a parent's employer without first obtaining a court order. Additionally, the agency can go to court and request that the judge hold the non-custodial parent in contempt, which can result in the imposition of fines, jail time, or the suspension of driver's and professional licenses.

The CSEA may also pursue child support modifications on behalf of a parent receiving public assistance. This requires the filing of a motion and attending a court hearing to present evidence. In Ohio, existing child support orders may be increased or decreased only if there is a change of circumstance from the time the last order was issued. Typical reasons for modifying an order include the involuntary loss of a job or other significant changes in income. Further, if the child's expenses have increased, such as a rise in uninsured medical costs due to a disability, it might warrant a modification.

Is There a Statute on Collecting Child Support in Michigan?

Kansas monitors child support by requiring parents to make their payments through the Kansas Payment Center. Language to this effect must be included in every new or modified child support order. Under both state and federal law, child support payments are made through income withholding orders, or IWOs. IWOs obligate a parent's employer to deduct child support from his wages or salary and forward it to the state. If a parent is unemployed or self-employed, however, IWOs may not work and a parent can fall behind with payments.

What Happens When You Don't Pay Child Support in Illinois?

Every child has a right to receive care and support from her parents, and this parental responsibility doesn't end ...

When two parents have children together but don't share a household, one parent often needs to provide financial ...

How to Compute Child Support Payments in Michigan

Calculating child support under Michigan law can be confusing and complicated. The state uses the income shares model, ...